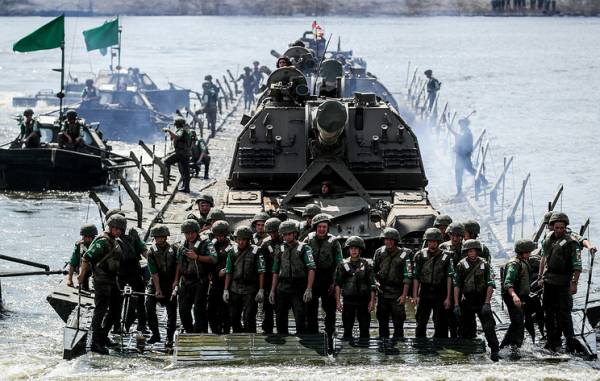 Russian soldiers during a pontoon crossing

“In fact, weather is considered to be the pontoon the rain: in cloudy weather, in combat conditions it is best to build bridges and to transfer technology. And today the heat under thirty, the inside of military vehicles — generally about forty degrees, the climate control was not provided”, — says one of the organizers of the international stage of the competition pontoon-crossing units “Open water — 2018,” Colonel Alexander Grigoriev.

“Open water” — it’s like a relay race, only instead of balls and hoops participants forward speed through the water tanks, “Ural” and howitzers. This year the organisers attracted more than 250 soldiers and more than 150 units. Key participant in Murom, Vladimir region, of course, was the Russian team. Muromlyane — soldiers of the 45th guards of the Berlin order of Kutuzov, Bogdan Khmelnitsky, Alexander Nevsky and red Star separate engineering brigade of the Western military district in the final “Open water” win in 2015.

To measure swords forces with the best military engineers of our country in this time arrived colleagues from the Chinese province of Henan — soldiers of the 83rd chemical engineering brigade of the land forces of the people’s liberation army of China. At home this leading avant-garde force of the chemical engineering troops called the “defender of the people”. Today, however, guests are objectively difficult: both teams play on the Russian technology.