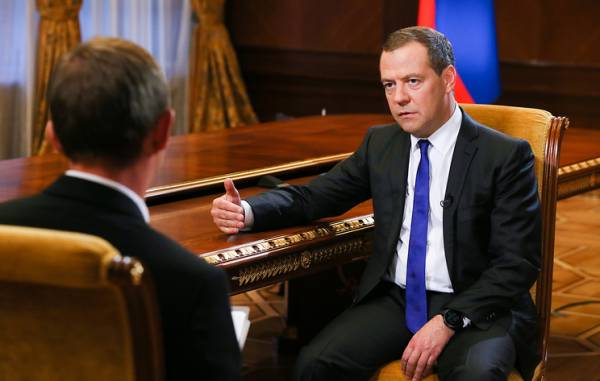 MOSCOW, 7 Aug. /TASS/. NATO enlargement is not a cause for concern in Moscow, since the military capabilities of the Alliance, including nuclear weapons aimed at Russia. This was stated in interview to the newspaper “Kommersant”, the Prime Minister of the Russian Federation Dmitry Medvedev.

He noted that NATO “from all sides, trying to encircle the Russian Federation”, despite the fact that there is no confrontation between the two blocs – NATO and the Warsaw Pact”.

“NATO not only continues, it expands and an increasing number of countries are trying to involve the North Atlantic Alliance. We can not remain indifferent, because it has not been canceled nuclear parity in the world, has not been canceled that for military commanders is extremely important to understand the relationship between the strategic nuclear forces of the various States. And NATO States that whatever is said by our colleagues from the Alliance, still consider the Russian Federation as a potential enemy. And obviously, their military capabilities, including nuclear triad, aimed at the Russian Federation”, – said Medvedev.

According to him, Russia “cannot be indifferent” Contracting around it a ring of NATO countries, “because in this case we are not talking only about strategic nuclear forces, but tactical nuclear weapons, which, when approaching the borders of the Russian Federation acquires the quality of strategic nuclear weapons. And also [it] on non-nuclear means, which at the moment, given the fact that they are precision in nature, can cause tremendous damage.”

Prime Minister Dmitry Medvedev hopes that the leadership of NATO enough acumen not to accept in its membership to Georgia, as this can lead to conflict.