WASHINGTON, August 6 — RIA Novosti. The Russian Embassy in Washington, commenting on the call to the chargé d’affaires of Russia Dmitry Zhirnova in the state Department, expressed regret, noting that the United States was slipping into “megaphone diplomacy”. 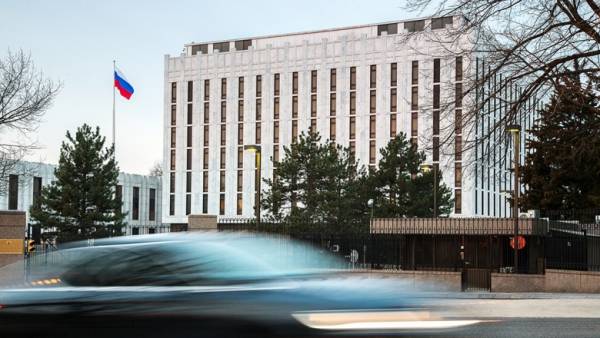 Earlier, state Department spokesman Heather Nauert in his Twitter account on Sunday said that the U.S. assistant Secretary of state for European and Eurasian Uess Mitchell called Zhirnova in connection with allegations by the us authorities to address Russia’s “aggressive propaganda”.

“In presenting Mrs. Nauert, from our diplomats have demanded “accountability for the aggressive intervention of Russia” in American internal Affairs”, — the Embassy notes.

What kind of answer can be a speech if the subject of charges does not exist in principle?The Russian Embassy in the United States

“Over the past two years repeatedly and at various levels, we debunked the absolute failure of such insinuations, no evidence that was not given. What answer we will be taken from the ceiling of publication in media such as messages about blocking the social network “Facebook” the 32 accounts in the process of internal censorship imposed on Internet companies by us politicians under the slogan of struggle against “Russian threat”?” — wonder Russian diplomats.

“I can only Express regret that the state Department is once again slipping into “megaphone diplomacy”. In fact it turns out that the foreign Ministry is playing to the forces in the American establishment, who are developing in their own interests the theme of “Russian interference” in the political process in the United States,” they added, pointing out that, “apparently, this is not ethical desire to publicize tendentious in the light of the contents of diplomatic contacts.”

The Embassy urged American colleagues to focus on professional and mutually respectful working stabilization and normalization of relations between the two countries. “This is the task of the Russian Embassy in the USA”, — concluded the diplomat.

The US charges in the address of Russia

Earlier, the US demanded Russia to stop “interfering” in the internal Affairs of the country. The statement was made after Facebook reported “documented attempts” to influence the American public ahead of the elections. In the opinion of the representative of the foreign Ministry Maria Zakharova, such statements are “blatantly play up the” political forces inside the United States, putting the legitimacy of the election of Donald trump questioned.

The investigation of the alleged Russian “intervention” in U.S. elections, and the alleged “ties” with trump’s Russia, refuted the White house and the Kremlin, is spectacular Robert Mueller. While evidence of any “interference” was not given, despite the fact that the “investigation” lasted for more than a year.