Why the actor was appointed special envoy of the Russian foreign Ministry. 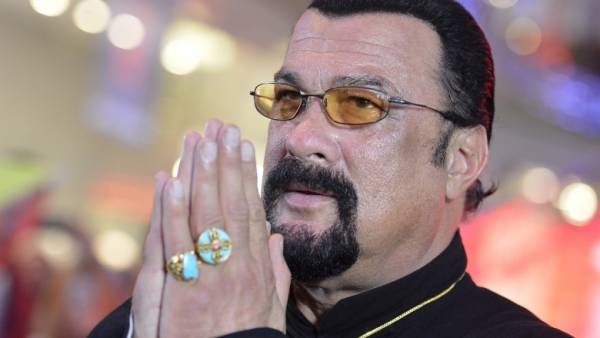 Steven Seagal was given the role of international significance — the American actor will be the special envoy of the Russian foreign Ministry on issues of humanitarian relations between Russia and the United States. In America the press and the diplomats considered it a mockery. As action hero became a Russian diplomat? And why at home he is criticized? About it Ivan Yakunin.

November 2016: the Kremlin Amateur judo Vladimir Putin presents to the lover of Aikido Steven Seagal a Russian passport. But even then it was impossible to present that the new citizen of Russia is waiting for a diplomatic career. It would seem that the General humanitarian relations and action hero, who in each film ruthlessly breaks the enemies hands. And a few words in Russian that Sigal learned to their roles, were clearly not from the sphere of diplomatic etiquette.

To see which path leads out of Hollywood in the Smolensk area, “Kommersant FM” turned to the man, which began with a tour Seagal in Russia. This Hollywood producer Bob van Ronkel, which brings American stars on the events of the Russian elite. Thus Sigal met with the President. In an interview with “Kommersant FM”, the producer considers that a new post of his protege to be particularly successful:

Steven is a great guy. He is famous, a legend, he is known around the world. He is familiar with Putin and trump, they both love and respect. If none of their common acquaintances may improve relations between Russia and the United States, Stephen may. I believe in him, because he can directly talk with the two presidents.Bob Van Winkelbauer

It is clear that not all the stars, which van Ronkel brought to Russia, got citizenship and became diplomats, but Seagal is a special case. Perhaps the fact that the election actor always supports Republicans fiercely criticized Obama, especially in terms of cooperation with Russia. Perhaps that is why his appointment is so outraged democratically-minded Americans.

So, journalist The New York Times Margaret Coker wrote on Twitter that it is now the era of logical decisions is officially over.

Appointment Segal agreed to comment for “Kommersant FM”, the former US Ambassador to Russia Michael McFaul. In correspondence he said that he sees the newly-made diplomat no prospects: “Maybe Seagal is popular in Russia, but not in the States. He has no experience in diplomacy, it is all just meaningless.

Moreover, I believe this appointment is humiliating for the Russian Ambassador Anatoly Antonov.

I, at least, in place of the Antonov, would be offended by it, but perhaps in this lies the meaning? Perhaps Vladimir Putin also understands that this is a completely meaningless act, to which he went just because actually not trying to improve Russian-American relations? Someone needs to ask him this question.

Maria Zakharova said the criticism succinctly in response to the request to “Kommersant FM”, she wrote: “the Contribution of McFaul in the deterioration of bilateral relations is huge.”