Moscow. 4 Aug. INTERFAX.RU Nikki Haley claims that Russia has given the citizens of North Korea thousands of work permits. 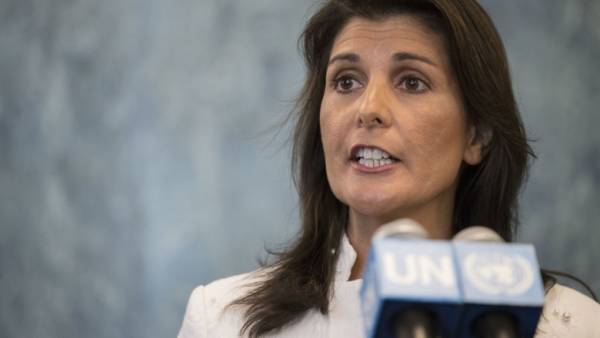 US Ambassador to the UN, Nikki Haley said Friday that Russia was granted permission to work on its territory several thousand citizens of the DPRK and thus violated the sanctions of the UNSC resolution on the DPRK.

Credible reports of Russia violating the resolutions of the UN Security Council with respect to (restrictions — if) in the work of the North Koreans abroad, is a concern.Nikki Heliported USA at the UN

“Words are cheap: Russia may support sanctions only words in the Security Council, only to break them by their actions”, — reads the statement.

However, she recalled that sanctions against Pyongyang will not be lifted until the complete denuclearization of the DPRK.

Adopted at the end of 2017, the UN security Council resolution mandates that all UN countries to send home a North Korean labour migrants no later than the end of 2019.

Earlier, the American newspaper the Wall Street Journal reported that Russian authorities after the adoption of the resolution allegedly allowed thousands of North Koreans to enter Russia to work.

In response, the official representative of Russian foreign Ministry Maria Zakharova said that the interior Ministry issues work permits to citizens of the DPRK, the contract which was concluded before the entry into force of UN security Council resolution.

“Speaking of North Korean workers is important to understand the meaning of paragraph 17 of UN security Council resolution on this issue. According to the said paragraph of the resolution, no state member of the UN should not give work permits to citizens of the DPRK in the territory under their jurisdiction. However, this provision shall not apply in respect of work permits, work contracts which were issued prior to the adoption of this resolution, and it took place on 11 September 2017,” she said at a briefing on Friday.

See also: the Dictator and the agent provocateur: on what terms will be able to reconcile the US and North Korea