For the sake of the deputies on the day will interrupt a vacation. 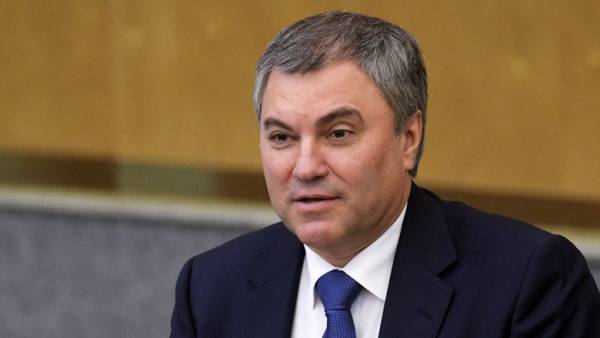 Speaker of the state Duma Vyacheslav Volodin has declared that the state Duma will pass “large” parliamentary hearings devoted to raising the retirement age. They are scheduled for August 21. Thus, the deputies on the day will interrupt the vacation that they have ends on August 27. According to Volodin, after the holidays, the MPs will begin the regional week, and from 27 August to 9 September, the parliamentarians will work in their constituencies.

“Given the importance of this bill, it would be right fully to discuss it before the start of the fall session,” — said Volodin.

A hearing was supported by all factions of the state Duma. In the discussion of the pension reform will involve MPs, government officials, representatives of legislative and Executive authorities of regions, as well as experts.

A government bill on the gradual increase in the retirement age for men from 60 years to 65 years to 2028, for women from 55 to 63 years to 2034 was adopted by the state Duma in the first reading on 19 July. Voted for the document, only the deputies of “United Russia”. KPRF, LDPR and “Fair Russia” has opposed reform. Date of consideration of the bill in the second reading is not yet assigned, but deadline amendments for the second reading was extended for a month from 18 August until 24 September.

Pension reform, not only provoked a drop in the rating of the President, Prime Minister, state Duma and the government in General, but also led to conflict within the “United Russia”. The Deputy Natalia Poklonskaya, the only one of the United Russia party voted against the reform, has been criticized by Secretary of the party’s General Council Sergei Neverov. He proposed Polonskaya to think whether it is ready to continue to work in the faction. And deputies-United Russia refused to come to the meeting headed by Polonskaya Commission on control over incomes of parliamentarians. Deputy Sergei Zheleznyak, who missed the vote on the bill, has submitted his resignation from the post of Deputy Secretary of the General Council.

The parliamentary opposition appeals to the fact that the vast majority of the population strongly opposed to reform. The Communist party plans to hold nationwide referendum, which will put the question whether the citizens of the changes to the pension age. The Communists agreed with the CEC of the optimal formulation of the question for the referendum and was going to start the creation of the initiative group.