The fallen in Russia, the meteorite has discovered a new mineral

But it’s not vibranium, it is Rakitic! 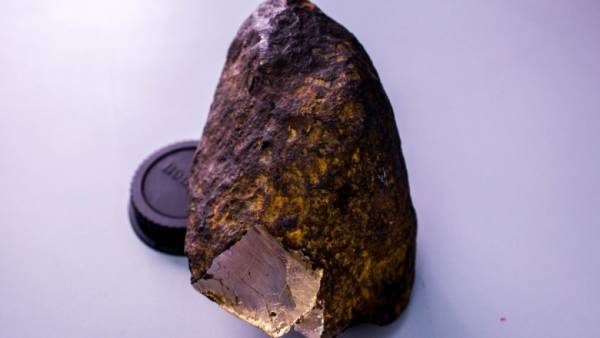 Researchers from the Institute of Geology and Mineralogy, and the Geological Institute in Ulan-Ude, Siberian branch of the RAS jointly with colleagues from the Novosibirsk state University and Ural Federal University have discovered a new mineral — Rakitic. This is unusual in its structure, the nitride of vanadium was discovered in an iron meteorite found in 2016 Buryatia Republic near the village Uakit. The corresponding article was published in the collection of Proceedings of the 81st Annual Meeting of The Meteoritical Society in 2018.

The authors investigated an iron meteorite Uikit. It weighs just 3.96 kg, and the main component material — kamacite — an alloy of iron and Nickel, a typical metal component of meteorites. However, in Oakite was also found small impurities, among which, troilite, a rare type of iron sulfide, and daubreelite (Fe2 + Cr2S4).

The researchers named their new outdoor mineral Oiticica, in honor of the nearby village. Among daubreelite inside of the meteorite, it forms isometric cubic crystals, and in the environment schreibersite — rounded “grains” whose size is typically less than 5 micrometers in diameter.

The authors announced a new mineral only now, after the formal registration at the 81st annual meeting of the Meteoritic society. It should be noted that geologists have known many minerals found only in meteorites. On the Ground of their formation is extremely difficult, because the conditions in space are fundamentally different as the pressure and temperature range. Finds of exotic minerals of cosmic origin are essential to better understand the conditions in various parts of the Solar system and thus to understand its origin and evolution.