Speaker of the state Duma Vyacheslav Volodin has declared that he had received a letter from the head of the Commission on control over reliability of data on incomes of deputies Natalia Polonskaya. According to him, he sent a letter to the leaders of all factions with a request to “assess the work” of the Commission. 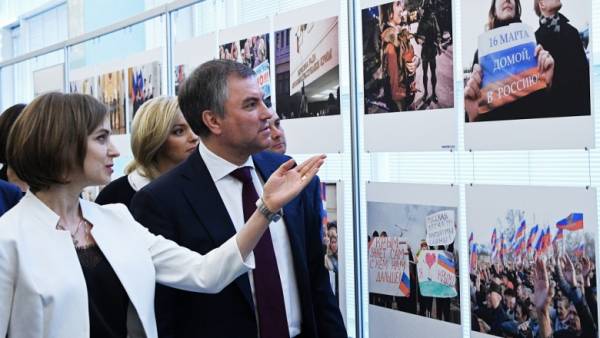 We will remind, during a meeting of the lower chamber 19 Jul Natalia Poklonskaya became the only United Russia, voted against the proposed project of raising the retirement age, and at the meeting convened by it on 26 July, the Commission came only 3 deputies from 17. MS Poklonskaya considered this demarche of deputies and promised to complain to the speaker of the state Duma on the behavior of colleagues. After that, the leader of the Duma faction “United Russia” Sergei Neverov said that Natalia Poklonskaya is a fractional posts: “she was offered the faction.”

The interlocutor of “Kommersant” in the faction “United Russia” notes that Natalia Poklonskaya is not time to reschedule the Committee meeting. All in all, the website of the lower chamber referred to two meetings: November 17, 2016 September 22, 2017. While the Duma interlocutor “” underlines that the Commission formed on a parity basis and should discuss her work with all factions.

Even didn’t attend the Commission meeting on 26 July, the deputies do not see a reason to discuss the replacement of its leader. “You (journalists.— “B) I write sci-Fi about some kind of conspiracy, I just got sick and after a report on the meeting of the house immediately went home”, — said “Kommersant” member Ernest Valeev. According to him, the Commission is “extremely rare — twice a year, and no change of its head colleagues never discussed”.

LDPR Deputy Alexander Kurdyumov said “Kommersant” that was chosen an inconvenient time for the meetings of the Commission: “My opinion on the agenda of the meeting I expressed in the letter which conveyed to Mrs. Poklonskaya”. According to him, colleagues of Natalia Poklonskaya “was offended” because of her words about the move.