The work went beyond age

Retired works about a third of Russians. 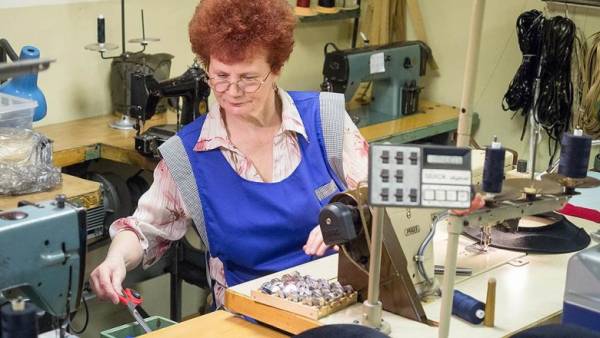 According to Rosstat, after retirement mainly age in Russia continue to operate around one third of pensioners. In the ten years that figure increased, albeit slightly by one percentage point. The main areas of employment of pensioners — industry, trade and education, and the unemployment rate among those wishing to work of citizens of retirement age is 3.3%. As reported yesterday by stat office in June 2018 pension payments amounted to 29.1% of the average wage, down from 31.2% a year earlier. The growing gap in incomes is likely to be to push older people to increasingly participate in the labour market.

The growth of pensions in Russia, according to Rosstat, is increasingly lagging behind the pace of increasing wages. According to statedata, in June 2018, the amount of the pension on the average amounted to 29.1% of the average salary in the country compared to 31.2% in June 2017. The income gap is probably the most important reason for the relatively high popularity after retirement — thus, according to the Federal state statistics service, from the compilation “labour force, employment and unemployment”, after retirement continued to work about one-third of Russian pensioners. Now in Russia there are more than 37 million people over working age (men — more than 10.7 million women — more than 25.9 million), the employment rate among them is 28.8%, and the unemployment rate (among those who want to continue to work) — up 3.3% in men and 26.5% when unemployment is 3.5% for women and 29.7% when unemployment is 3.5%.

Over the past ten years, the level of employment of seniors, though small, but grew — both in General and for men and women separately.

The majority of Russians over working age employed in the manufacturing sector (about 3 million), trade (2.3 million employees), education (2.3 million people). The highest average age of workers in agriculture (44 years), health care and utilities (43.2 years), and education (42.9 years). The majority of working pensioners decorated as employees and work 30-40 hours a week — as well as the staff of middle age.

Among pensioners who consider themselves unemployed and 35.8 percent left their previous job due to retirement, of 11.4% — health, 9,9% — because of the downsizing. We will remind that earlier “b” already in detail wrote about the state of health of Russian pensioners — for example, the number of diagnoses by almost all the most common diseases in this population in 2013 increased by 10-15% (see “Kommersant” on 27 July).

The average time of search of work of pensioners is 8.3 months (the average is 7.6 month), about a third is looking for her a year or more, however, the same rate as long-term unemployment Rosstat fixes and in the main group of employees. The majority of retirees looking for work through friends and acquaintances (74,6%), the Internet and the media (33,2%) and appealing directly to the employer (23.6 per cent). The state employment service attracted only 5.6% of elderly applicants.

Recall that the capacity of Russian pensioners is one of the arguments in favor of the recently launched reforms of the retirement age — if you understand Russian pensions as a benefit for loss of ability to work.

A bill raising the age of retirement by five years for men and eight for women, passed its first reading in the state Duma. Earlier, a similar data confirming the continuation of work in retirement among the Russians, represented the Higher school of Economics — according to her, the average length of service upon reaching retirement age is five years. However, it should be noted that, perhaps most of the work falls more on the category of retired ahead of schedule — those in the country, according to the Pension Fund, nearly 10 million people. However, some data on disability in this group (which could indirectly confirm the necessity of reform is the institution of early pensions) does not exist in Russia.