Scientists don’t know what it involves. 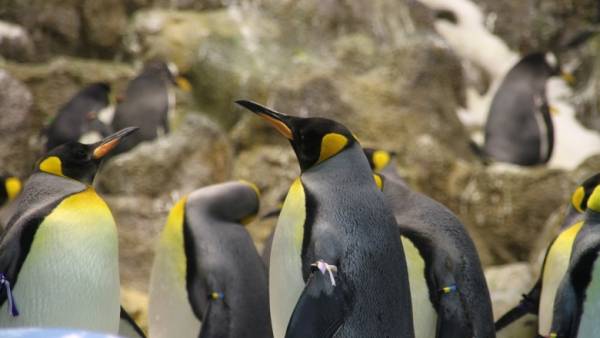 The world’s largest colony of king penguins lost in numbers, and scientists cannot understand why it happened, reports ScienceAlert.

In 1980-ies the population of the colony living on the subantarctic island of cochon, which is part of the Crozet archipelago, was about two million individuals, including 500 000 breeding pairs, and now the colony has only about 60 000 such pairs.

Using satellite data, high-resolution images taken in the period from 2005 to the present day and in the period from 1982 to 1988, experts from the French research center of Chizé Centre for Biological Studies (CNRS) evaluated the changes in colony size (from the time of the visit by a team of scientists in 1982).

It turned out that the colony, known since the 1960-ies, has lost 88 percent of its population.

To assess the current size of the colony, the research team examined the contours of the island — looked how much they are covered with vegetation. Breeding colonies of king penguins as scientists know, is flat or gently sloping areas, devoid of vegetation, in the amount of 1.6 and 2.2 individuals per square meter.

Since the 1980-ies the data plots on the Isle of cochon heavily covered with vegetation, which, as noted, points to the serious decline in the population of the local prison.

To determine precisely what accounts for these dramatic changes can be difficult.

So, the next colony of penguins living on other Islands have not experienced a similar downsizing. For example, a colony on Possession island (also part of the Crozet archipelago), the number of colonies of king penguins remains more or less stable since 1960-ies, while the population on the island, Marion island and the Kerguelen Islands had increased.

Thus, as the researchers suggest, the reasonis probably rather local (peculiar only to the island of cochon) than global. However, we consider several possible versions.

Thus, the El niño of 1997, when there were fluctuations of surface temperatures in the Indian ocean, has reduced the ability to obtaining food from the king penguins on Possession island — as a result this had a negative effect on the breeding of these animals. Since then, the colony was restored, however, it is possible that a colony of penguins on the island of cochon event had a more powerful effect.

It is also possible that the penguins have moved to another location.

King penguins usually live in the same town where they were born and where their first reproduction, however, the satellite images of 2005 found a different, a separate colony close to the shore that were not previously noticed. The size of this colony, however, are too small to explain such a strong loss of strength.

Another possible explanation infection, such as ticks. That the disease struck such a huge part of the colony — it would be unprecedented, the researchers say, however, there are cases when ticks were destroyed by king penguins in large quantities: for example, on Marion island, there was a similar problem in the early 1990-ies, although, again, the disease is not struck by such a large percentage of the population and the colony recovered.

The researchers note that the reason for this strong reduction in colony size remains a mystery to be solved. “Although the decline began at least 20 years ago, looks like it still and its causes, can be and are still active,” — say experts in a paper published in the journal Antarctic Science.