The last day of what?

First, all participants, including never interested in archeology, remembered picture of Charles Bryullov “the Last days of Pompeii” (1830-33), a famous example of Russian classicism. 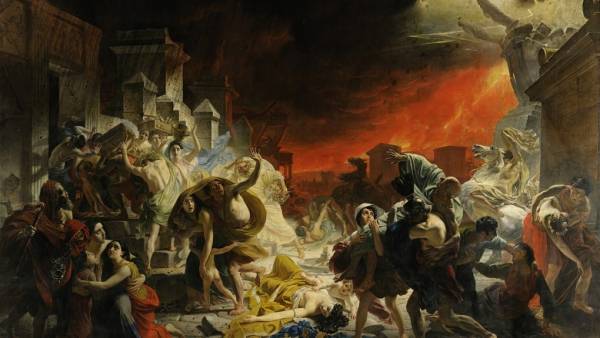 However, in this dispute the sense of this wonderful picture came out a little bit because in the beginning of the XIX century, the name of the ancient city were used in the singular — Pompey. Very convenient: Pompey was no Pompeii. But today the norm is different, the word “Pompeii” — plural. (In Italy there are other similar examples, such as ancient Veii and Falerii. Thank God, about which we have not yet written.).

Therefore, in the course went other arguments. One part of the revision indicated that the main online resource for checking the correct spelling portal to “Gramota.ru”. There, with reference to the “Dictionary of proper names of Russian language” Ageenko, F. L. (Publisher “Peace and education”, 2010), it is proposed to persuade the word “Pompeii” in the masculine — “Pompeii”.

Dictionary in any dispute about the language norm — a serious argument. Moreover, as stated in the annotation to this edition, it “is recognized as the correct version of the accent, pronunciation and declension of words and their forms”, and it is intended, first and foremost, employees of the media, that is just us.

However, another part of the wording were their arguments:

Don’t know what a dictionary is, but Pompeii inflected for the feminine gender at all serious authors in the last seventy years, writing on historical and archaeological subjects.

And began to give examples.

This is the main modern domestic work on Pompeii (Moscow-Leningrad, USSR Academy of Sciences Publishers, 1949), written in excellent Latin scholar, translator and antiquity, Maria E. Sergeenko. In the name of the ancient city is leaning in the feminine: “Chapter I. the Death of Pompey”.

is it Possible to completely forget your native language?

Another special edition, dedicated to the history of the lost city, was published in 1981: V. I. Krivchenko, “Pompeii. Herculaneum. Stabiae” (.). And in it the word “Pompeii” is leaning in the feminine gender.

The same Maria Sergeenko translated “History of Rome” Titus Livius, which was published in the publishing house “Science” in 1991. Comments to this academic publication was compiled and edited by the historian and philologist, a specialist in Roman history V. M. Smirin. In his comments read: “Nuceria — city in Campania (West Pompeii)”.