In search of the “Cordillera”: as in France, looking for sunken 500 years ago a warship

The spirit of the famous French Explorer Jacques-Yves Cousteau helps a search mission, which searches for the two ships — French and English — sunken 500 years ago, not far from Brest. 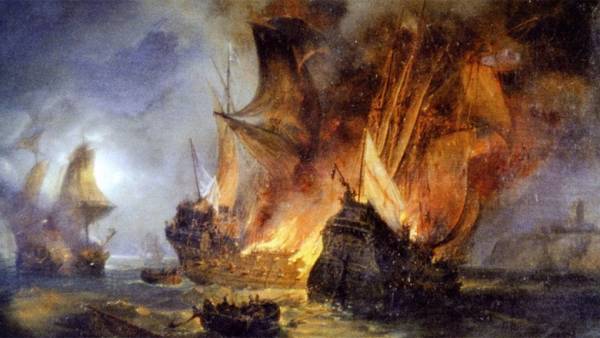 Instead of minesweeper Cousteau “Calypso” came the patrol ship “andré Malraux” of the Ministry of culture of France with a team of scientists and divers on Board.

Who owns treasures in sunken ships?

Task: to find, to extract from the soil and eventually raise to the surface the skeletons of the “Cordillera” and the “Regent” two gigantic ships sunk during the battle of Saint Mathieu in 1512. The role Cousteau — Michel Lur, a distinguished marine archaeologist involved in a thousand expeditions to study French underwater heritage.

“I’m obsessed with finding these ships for 40 years, says the noble, ruddy and bearded as befits a real sea wolf. — I’m not that young, and this expedition could be my last. If we manage at least to find ships and provide their retrieval colleagues, I’ll be happy.”

As sank the “Cordillera” and “Regent”

In France, or rather in Brittany, “Cordillera” is shrouded in myths. He was the flagship of the fleet the last ruler of the independent Duchy of Anne of Brittany. The ship was commanded by another Breton hero — hervé de Partsmaker, a kind of pirate-patriot. In the French manner Primage his name was; that name is still called the court of the French Navy.

Regent belonged to the same class as the famous flagship of the British fleet, the “Mary rose”, which is lifted from the bottom of the Strait 40 years ago and put up for display in the Portsmouth port. “Regent” was even bigger, “Mary rose”, its detection can become something huge.

The problem is that nobody knows exactly where the battle took place at Saint-Mathieu. It happened during one of the little known war between England and France and the Alliance of independent Brittany.

On 10 August 1512 the Franco-Breton fleet was at anchor in the French Brest, when on the horizon the British ships. Most of the French ships hurried away to a safe place.

But the “Cordillera” and the other two ships stayed behind to fight. “Regent” attacked “Cordillera” with all its strength, the melee lasted two to three hours. And then came the big Bang — why, is still unknown. Both ships went to the bottom, killing hundreds of people.