Comet “the Incredible Hulk” as close to Earth August 7

Moscow. August 1. INTERFAX.RU — a Giant comet, which received from their name “the Incredible Hulk”, August 7, will approach the Earth on the minimum distance and its dust environment may cause certain electromagnetic processes in circumterrestrial space. This was told “Interfax” the Russian researcher of cometary meteorites Eugene Dmitriev. 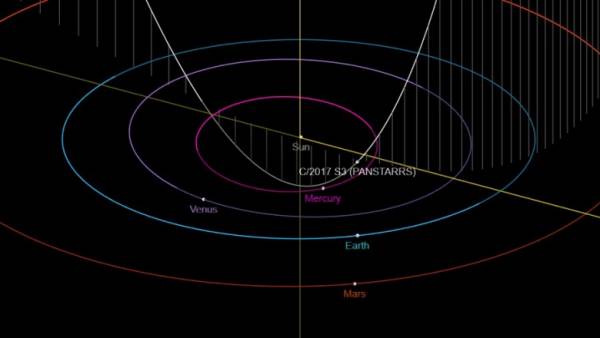 “We don’t know what sizes will and so a giant gas-dust environment after the rendezvous with the Sun, and she tentatively at the end of August will be at perihelion (closest to Sun point of the orbit of the heavenly bodies — if) closer to the sun than mercury, which will lead to a strong heating of the surface of the comet and to increase the dust cloud,” said he.

The expert reminded that the size of the dust cloud of the comet twice the size of Jupiter — the biggest planet of the Solar system. Its diameter is about 260 thousand km. While the celestial body is missing the usual comet tail. “The incredible Hulk” arrived in the solar region of the Oort cloud, which surrounds our planetary system. The comet was first noticed on 23 September 2017.

Assessment Dmitriev, the earth’s civilization may be faced with a deadly threat not only in a direct collision of the planet with the nucleus of an active comet, but with the passage of the Earth through its gas and dust environment.

“With the passage of the Earth through gas-dust environment (GPO) of a bright comet — and this in the history of our planet occurred repeatedly — it is not excluded the appearance of a giant lightning, comet generates a powerful electromagnetic pulse (CAMI), which can be destructive to civilization. The emergence of such a zipper is associated with the electrification of the solar wind with the coma (cloud of gas and dust around the comet’s nucleus — if) active comet that will cause an electric discharge in its rapprochement with the Land,” he said.

How to escape from asteroids

Dmitriev compares these CAMI with artificial electromagnetic pulses (EMP), who have learned to create military purposes. “Artificial AMY are obtained by nuclear explosions and the explosion of electromagnetic bombs, the capacity of which can be reduced to such a level that it now begins to be called a killer of civilization,” he said.

“For clarity, let’s imagine a hypothetical scenario the sudden appearance of this CAMI. Completely fails, all electronic equipment stops working for any enterprise and critical infrastructure, including power plants, transportation stops, drop the aircraft,” — said Dmitriev. “Not necessarily, on 7 August, the events will develop according to a catastrophic scenario, but something similar to a greater or lesser extent,” he acknowledges.