China has started to destroy the coffins and forbid the funeral

BEIJING, 31 Jul — RIA Novosti. The province of Jiangxi in Southeast China started to take measures to implement policy “just cremation” with the objective of conserving land resources, forcibly confiscating from the local population prepared the coffins and prohibiting traditional rituals of burial of the dead, the newspaper South China Morning Post. 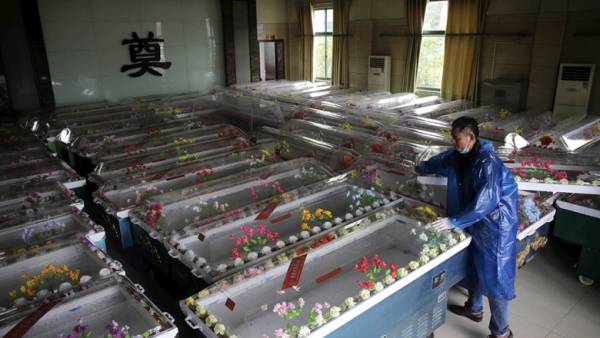 The provincial government intends to make cremation the only permitted method of destruction of human remains. Authorities in many cities throughout the province in order to conserve land resources has set a deadline of execution of the policy of “just cremation” by September this year.

“Russia — a country of lamentations. But it is fixable”

As writes the edition, according to photos and video footage spread in social networks in China over the past weekend, officials force confiscated the coffins of the houses of local villagers in the urban districts of Ganzhou, Yichun and Jian. Huge pile of wooden coffins were destroyed by the excavator, while many older inhabitants, lay in coffins in an attempt to save them.

Since the government issued a policy of “zero funeral,” possession and manufacture of coffins was prohibited, and the province was taking already existing graves. He said a local resident, who wished to remain unnamed, local poor families needed many years to accumulate about 5000 thousand yuan for the production of coffins, while the government offered only two thousand yuan in compensation.

According to him, officials have banned not only coffins, but other traditional rituals, including tombstones and paper money.

This is not the first controversial case in China associated with the funeral. Previously, the government of Shandong province was also banned from conducting traditional burials. Under the new policy, the deceased must be cremated, and relatives must provide a certificate of carrying out these procedures.

However, for some residents of China, it is imperative to be buried in the ground the traditional way to the body at the funeral was intact. Therefore, some citizens have resorted to the “dealers” tel to burn someone else’s body and get a certificate, and the body of a relative buried intact, it is often secretly held.

In April, five men were sent to prison for stealing and selling bodies for cremation in the County Juye County Heze city in Shandong province. Employee of one of the crematoria in Shandong noted that many understand the need for cremation for the sake of good ecology, but the older generation does not accept this, people want to be buried in a traditional way, so their children go on the offense, to fulfill the last will of the parents.