The large hadron Collider for the first time accelerated atoms

The large hadron Collider for the first time accelerated atoms — nuclei of lead are associated with the single electron. Scientists have been able to hold a beam of atoms inside the accelerator 40 hours. Before the Collider worked only with ions and particles — protons, nuclei of xenon and the lead nuclei. 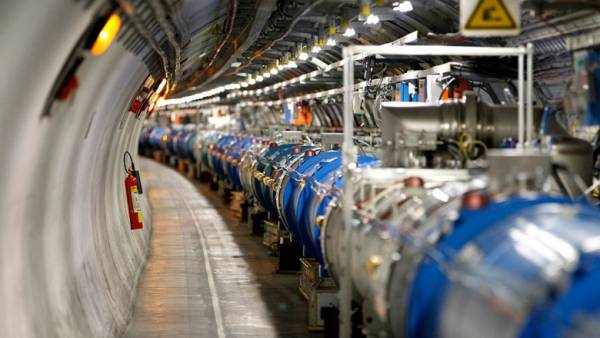 A new modus of operation of the accelerator will turn it into a source of photons of very high energies, according to the European organization for nuclear research (CERN).

Usually at the Large hadron Collider (LHC) accelerates beams of protons. In the accelerator, they “gain” a huge amount of energy (about ten teraelectronvolt), and then across, and scientists observe the birth of a new particle fragments. This allows you to specify the mass of known particles, which arise in the intermediate reactions (e.g., W bosons), to test common theoretical models and to set constraints on the parameters of the new theories that aim to unify the Standard model and General relativity.

Physics picture of an atom with a record resolution of

Of course, the TANK can push away other charged particles in electromagnetic fields, generated by the system of magnetic coils, particles will be accelerated as well as protons. All that is needed is to recalculate the strength of the fields to force the particle to stay inside the accelerator. Every year, scientists are paying a little time of operation of the Collider, to conduct such “atypical” collision and process their results.

Last Wednesday (July 25) TANK first used as a particle “atom” — the core of lead is associated with a single electron. Of course, such “atoms” are very different from ordinary, electrically neutral atoms of lead, which contain 82 of the electron. However, this is a great achievement for the LHC, so as to keep the atoms intact during acceleration it is very difficult to disperse the particle, it is necessary to inform her of a large amount of energy that can easily tear an electron from the nucleus and destroy the atom. When this happens, the charge of the particle rises sharply, the Lorentz force increases, the motion of the particle ceases to be synchronized with the field strength of the accelerating coils, and she crashed into the wall of the Collider.

Until now, scientists could not keep atoms intact when accelerating TANK, although other accelerators (e.g. RHIC) succeeded.

In the first experiment, the researchers broke up the 24 groups of atoms to a relatively low energies and held them in the Collider in the next hour. The researchers then turned coil at full power and in two minutes dropped the beam atoms become too often lose electrons and crash into the walls of the Collider, and physicists had to complete the experiment, so as not to damage the installation.

In the following experiment, the scientists reduced the number of atoms is four times that allowed them to increase the holding time up to forty hours. It was even more than predicted by theoretical calculations. Currently, scientists think that it is possible to optimize the installation in such a way to leave the hold duration at the level achieved by increasing the beam power.

Scientists hope that in the future experiments with atoms will transform the TANK in “gamma-a factory” (factory gamma) photons with very high energies. In fact, if you Shine on accelerating the atoms with a laser, some of them will go to an excited state and then return to the main, simultaneously emitting a photon. In its own reference system associated with an atom, the photon energy will be small, however, in the laboratory frame of reference associated with the stationary observer, the photon energy will increase by many orders of magnitude due to the Doppler effect.

In turn, high energy photons will be converted into ordinary particles and dark matter, and with their help you can verify some theoretical models that predict a non-zero interaction cross section, vinow and photons.

Previously, the Large hadron Collider worked several times with the nuclei of heavy elements, but not with atoms. For example, in October 2017 accelerator for eight hours was pushing the nuclei of xenon to explore the formation of a quark-gluon plasma.