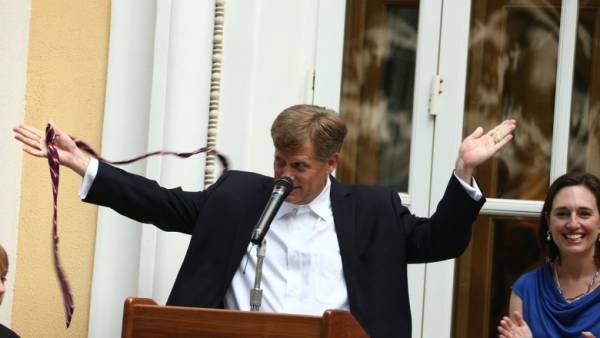 He recalled that for nearly 30 years engaged in scientific activities and is a Professor. “Almost all my research was concerned with Russia, — said ex-Ambassador. — I can no longer conduct research in the Russian Federation”. “I are currently in the sanctions list, but even if I would ever to be expelled, I’ll never be able to go to Russia,” McFaul said, referring to the already mentioned “enemies list”.

“My scientific career regarding writing [work] and research is over,” he said. “My life has changed dramatically,” added the former Ambassador.

In November 2016, the official representative of Russian foreign Ministry Maria Zakharova, speaking on Russian TV, said that the reason for the inclusion in the Russian sanction lists McFaul, who served as U.S. Ambassador to Russia in 2012-2014, was the intentional damage done to bilateral relations on his part.

Following the meeting with the President of the United States Donald trump in Helsinki Russian leader Vladimir Putin recalled that between the US and Russia there is in force since 1999 and the agreement on legal assistance in criminal matters, and expressed readiness to assist in the investigation attributed to Russia’s intervention in the American elections in 2016. Putin offered spectacular USA Robert Mueller to send Moscow an official request under this agreement. He admitted that Russian investigators could interrogate all the people in the USA somewhat suspect. At the same time Putin pointed to the need for such actions were mutual.

The head of Department of the Prosecutor General of the Russian Federation Alexander Kurennoy then said that Moscow would like, in particular, to interrogate the McFaul and the head of Hermitage Capital William Browder, who was sentenced in absentia in Russia.

After the summit, the White house said it is considering the possibility of questioning by Russian investigators of American citizens, which, according to Moscow, was involved in illegal activities in Russia. But on Thursday, in an official statement by the press Secretary of the White house Sarah Sanders reported that trump will not accept such a proposal, however, expects that 12 Russians accused by Washington in absentia of involvement in the intervention in the elections, will arrive in the United States.