The foreign Minister also answered the questions of young politicians, sociologists and bloggers. 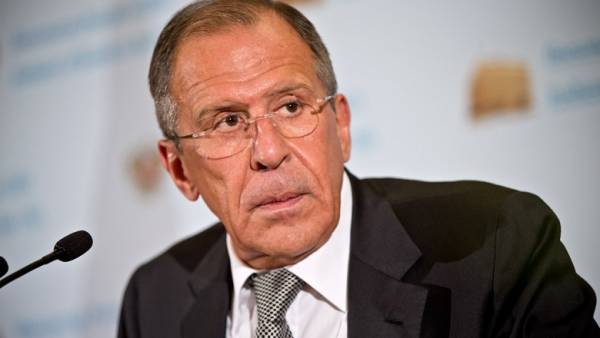 The Minister of foreign Affairs of the Russian Federation Sergey Lavrov made July 30, a lecture to the participants of all-Russia youth educational forum “Territory” and answered their questions. Foreign Minister told about the purpose of the G20, relations of Russia and Ukraine, as well as the reasons that caused the Ukrainian crisis. In addition, Lavrov said that Western military plans against Russia are not a secret.

According to the head of the Russian foreign Ministry, the Group of twenty (G20) was created in order to solve the problems of the world economy and financial monetary system. “”Twenty” is a very interesting phenomenon, it was conceived in order to agree on fundamental issues of the functioning of the world economy”, — Lavrov said and added that the last time the economy “drag political problems,” the group is increasingly engaged in political issues.

The crisis in Ukraine was caused by the dissatisfaction of a number of Western countries the decision of former Ukrainian President Viktor Yanukovych to carefully consider the Association agreement with the EU and the country’s commitments under the free trade zone of the CIS.

He also explained that the Russian side proposed to discuss this issue in a trilateral format, because in relations between Russia and the European Union there are a number of protective measures that could create an imbalance in the balance of trade between countries. However, according to Lavrov, the Commission “categorically and arrogantly” refused to discuss that possibility.

“Then the President realized that here you also need to think about, because if he signed these zero tariffs with the EU, we would simply have to close the border with Ukraine. That’s all,” said the Minister.

He [Yanukovych] did not forgive, and that’s what caused the explosion of popular anger, which we saw on Maidan square and which was actively promoted and Europeans, and Americans.Sergei Europeanists of foreign Affairs of the Russian Federation

Drew attention Lavrov and how the leaders of the West see today’s Ukrainian leadership, in particular the incumbent President, Petro Poroshenko. According to him, without the presence of the media European colleagues tell them “enough unflattering things and working to some kind of reaction”. “During this time, the West was convinced that Poroshenko and the inability of regarding the reforms demanded by the international monetary Fund”, — concluded the foreign Minister.

Sergei Lavrov also noted that Moscow is aware of the plans of the Western military against Russia. According to him, the closure of Russian military bases in Cuba and Vietnam did not affect awareness of the country’s leadership.

However, he noted that the United States is not ready to discuss the proposal of Russia and China on the Treaty on the stationing of nuclear weapons in outer space. In his opinion, the us administration expects to leave this area without legal regulation. “Another area where there are no rules and where our Western colleagues, especially Washington, would like to keep the rules because they are so easy to solve their problems,” said Lavrov, noting that the new draft of the Pentagon’s budget provides funding for those articles which are connected with the preparations for the withdrawal of nuclear weapons in space.

“Territory” — all-Russian youth educational summer forum, held in 2015 on the initiative of the Federal Agency for youth Affairs (Rosmolodezh) in village Courtyards Kameshkovskiy district of Vladimir region. At the forum, young people aged 18 to 30 years is for grants their projects, attend educational lectures and workshops.