“Earth fell, the forest was gone.” As there are craters in the ground

MOSCOW, 29 Jul — RIA Novosti, Tatiana Pichugina. A few days ago in Nizhny Novgorod region found a big hole in the ground. It is the result of karst processes — the leaching of rocks at depth. RIA Novosti together with the experts tells how such phenomena arise and how they are dangerous. 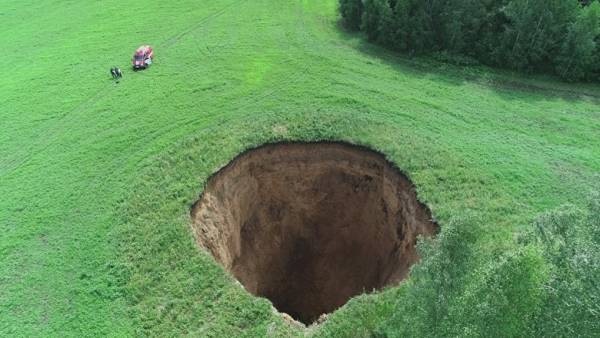 The hole in the hole

“I know of in the Nizhny Novgorod region the biggest failure of 115 meters in diameter, is near the village of Boldyrevo, Vorsmenskaya karst basin. In 2013, the City close to the railway formed the failure of about 60 meters in diameter”, — says Mikhail Leonenko, Director of LLC “Dzerzhinsk karst laboratory”.

His colleague had viewed the failure, discovered on July 24 in Shatkovsky district, near the village Aladino. Well that’s in the open field, where there are no people, no buildings. According to the MOE, the diameter of the hole is thirty meters, depth — about fifty.

Does the natural process, no human influence is not, therefore, for scientists, this failure is of great interest.Michael Leonenkova LLC “Dzerzhinsk karst laboratory”

The ground collapsed into a huge underground cavity with a volume of about forty thousand cubic meters. Now she has a vertical wall, but eventually they will crumble, and the pit will be conical.

Where are the big holes in the Ground (photos)

Next to a fresh hole got older craters of the same nature, and in General this area is considered cortopassi. Failures of this magnitude happen in the Nizhny Novgorod region on average once a year. And, for example, in Dzerzhinsk district five times.

Natural karst processes develop thousands and millions of years. If they are imposed technogenic factors, for example, breakouts, hot water in the city, the intense exploitation of water wells, mine workings, failures may become more frequent. In the large cities of the Perm region — Berezniki and Solikamsk — they have become a real disaster.

Water wears away the stone

Karst is the process of destruction by water of rocks, most of which is calcium carbonate (calcite) or sodium (common salt). These minerals are easily dissolved and washed away, leaving voids and caves with beautiful stalactites and stalagmites. The most famous karst caves in the Crimea and the Urals.