Buzz Aldrin allegedly admitted that he was not on the moon 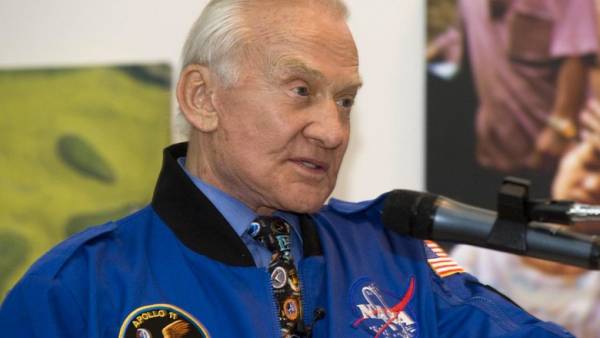 The network has become a viral video in which a former NASA astronaut buzz Aldrin openly admits that never been to the moon, answering a question of a little girl. Supporters of the lunar conspiracy theory believe that Aldrin finally told the truth. For the day the movie has collected almost 300 thousand users.

the lunar Eclipse through the eyes of users of social networks. This will no longer be in the XXI century!

Commentators who share the view of the Glockner, distinguished by a rich imagination. Some of them agree with him to the end: they believe that Neil Armstrong found on the moon secret base of aliens, which made it clear — visitors from Earth are not welcome here.

Actually, of course, the conspirators went their own favourite way and just pulled words out of context.

In 2015, Aldrin called for the National book conference in Washington, where a small visitor asked him why no one been on the moon for so long.

It is not a question eight year old girl. It’s more of my question. I want to know. Never been. So happens. And since this is no longer happening, it would be good to know why so leaves. In the future, if we want to continue to do something, we need to know why we stopped doing it in the past.Buzz Aldrin

Aldrin never said that on the moon no one visited. It was about the termination of the lunar program, and no missions since 1972.

the American dream of space

In the video, the conspirators did not get the further part of the interview where Aldrin reveals quite prosaic reason why people never set foot on the moon for the second time — the lack of funding. In the full version of the interview with Aldrin twice mentions that he went to the moon, saying that he and Armstrong got what the President wanted and that the world is proud of what he did.

“Money. It’s a great thing. If you want to buy new things, new missiles, and not keep doing the same thing over and over again, it will cost more money. And the rest also need money. So, we achieved what we wanted from the President… And then thousands, millions of people in the United States and around the world… you Know, when we got back, we went around the world and it was exciting to see — we did it. Not only Armstrong, but the whole world. They felt themselves part of what we could do. And we feel great,” said Aldrin.

Recent misadventures and showered on the head of Aldrin. In the spring of 2018, the media have attributed words to him about meeting with aliens. British tabloid the Daily Star has stunned the world with his “exclusive” message that just four astronauts, including buzz Aldrin, passed the test on the lie detector, talking about their experiences with UFOs during space flight.

In his article writers are stuffing referred to an institution of bioacoustics in Albany, Ohio, USA, the researchers who allegedly as a result of experiments conducted a “sophisticated computer analysis” of the votes of the astronauts, and came to the conclusion that those are completely sure in his meeting with UFOs.

The “researchers” did not bother that at the time of inspection two of the astronauts have died. That their technology allows you to communicate with the inhabitants of the underworld, in any case, they did not mention.