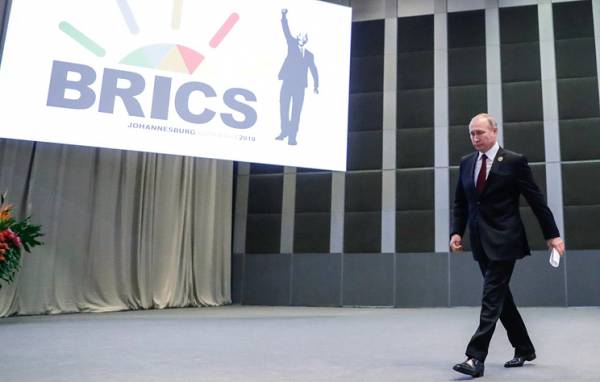 JOHANNESBURG, July 27. /TASS/. Russian President Vladimir Putin, who took part in the BRICS summit (Brazil, Russia, India, China and South Africa), said the rejection of economic sanctions one of the main points of the Declaration of the BRICS. On taken place on Friday a press conference following the summit, Putin also spoke about what the initiative was enshrined in the final Declaration.

Answering questions of journalists, the Russian President spoke about relations between Russia and the United States, expressed his opinion about the dollar as reserve currency and recalled that the head of the White house Donald trump an invitation to visit Moscow. The Russian leader also answered questions about Ukraine and Syria.

The results of the summit

One of the main points of the Johannesburg Declaration of the BRICS summit, Putin called the rejection of economic sanctions. “Approved the Declaration of Johannesburg, the main point of this paper lies in the rejection of the economic sanctions and use of force in violation of the UN Charter, the prevention of an arms race in space, the support of the Astana process of resolving the situation in Syria,” the President said.