MOSCOW, 27 Jun — RIA Novosti. Ukraine should completely abandon the import of gas and to prevent Kiev “bowed head and knee” to Moscow, Prime Minister Volodymyr Groysman at a government meeting on Thursday, which is broadcast TV channel “112 Ukraine”. 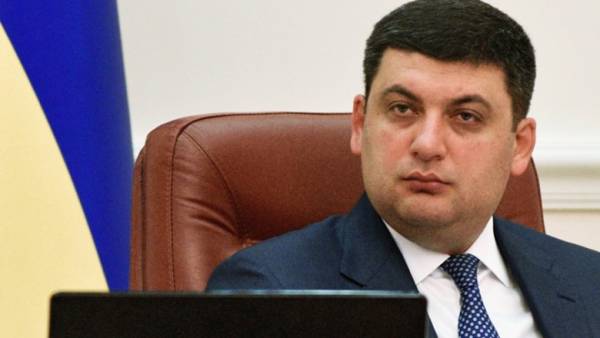 According to him, Ukraine has huge reserves of natural gas, which can provide fuel independence.

“It is very important to maintain independence, including energy. I always wondered how Ukraine, which has huge natural gas reserves in the depths, bought the gas from Russia. Should have come in December, as any government bowed head and knee, crawling to Moscow and agreed on the price of gas,” — said the politician.

Groisman also expressed confidence that Kiev will be able to get out from under the influence of world market prices for gas and to start full-scale production of Ukrainian gas, and subsequently reduce the price of natural gas in the country.

In November 2017, Ukrainian Prime Minister Volodymyr Groysman said that the country has 720 days is not buying Russian gas. While Kiev was overpaid for his European intermediaries from 20 to 50 dollars per thousand cubic meters. As estimated by the former head of the Department under the Ministry of defense of Ukraine Maxim Goldarb, the loss of Ukraine’s refusal to buy gas directly from Gazprom reached a billion dollars.