Assad: Russia’s military presence in Syria is a long-term

DAMASCUS, July 26. /TASS/. Syrian President Bashar al-Assad believes that Russia’s military presence in this country is long-term and it is necessary not only to combat terrorism. 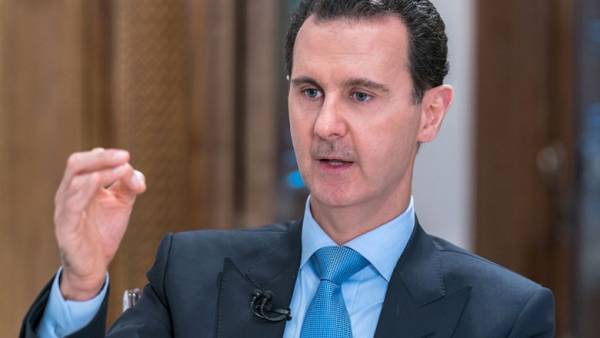 “Now there is a contract between Syria and Russia on the basis of at Mamimi, as you know. It will be valid more than 40 years,” said Assad.

“If the question was: did here the Russian army only in order to fight terrorism, then why sign a contract for more than 40 years? It would only a few years and then constantly to renew it,” said he.

“The armed forces of the Russian Federation are important for balance in our region, at least in the middle East, until, until will not change the political balance in the world, he said. — Maybe this will not happen, we don’t know. Therefore, it is important and necessary.”

“Russia is a big country, a great power. Therefore she has a responsibility to the world — continued Syrian leader. And she is responsible for the whole world.”

Part of that responsibility — “political and military presence in various regions if necessary”, said the President. “Maybe they [Russia] have no desire to be involved from a military point of view, but the reality of the world today is that it sometimes makes you move in certain directions,” stated Assad.

The fight against terrorism

The President also noted that the province of Idlib and other locations of the terrorists will become priority directions of operations of the army of Syria. “From the beginning of the war when the terrorists have only begun to control some regions in Syria, we clearly stated that our duty as a government to liberate every inch of Syrian land,” he recalled, noting that completed the liberation of ghouta, ends with the liberation of the South-Western part of Syria.

“Now Idlib is our goal, although not only of Idlib, he said. — Of course, there are areas in the Eastern part of Syria that are controlled by various factions, some of them ISIL (the former name of banned terrorist organization “Islamic state”), but it’s small pockets, and “Dzhebhat EN-Nusra” (a terrorist organization banned in Russia) and other extremist groups”.

“So we will be nominated in all these regions, — said the Syrian leader. — The military — and we give it over to them — will determine priorities, and Idlib is one of them.”.

Assad also has called the organization “White helmets” mask of the terrorist groups “al-Qaeda” (banned in Russia) and “dzhebhat an-Nusra”. “Such organizations as the “White helmets” does not exist. It’s just a mask — the mask “an-Nusra”, the President said, answering a question about whether there is this organization’s future in his country.

“They escaped from Syria, and not actually ran them out of here evacuated by Israel, Jordan and Western countries, “humanistic” Western countries. And now on the Internet there are evidence of videos, photos of the same members of this organization with swords in their hands, celebrating the killing of Syrian soldiers over their bodies”, — he stressed. “The fate of the “White helmets” is the same as any terrorist. They have two options: either to surrender and benefit from Amnesty, as it happens for four or five years, or to be eliminated, like other terrorists,” said Assad.

Answering the question whether it is possible to say that all members of the “White helmets” have left Syria, Assad said: “No. Most likely, [left] their leaders”.

“Because many of them [“White helmets” — fighters, and, in fact, we are now engaged in reconciliation with the guerrillas, some of whom have remained in Syria as civilians, they laid down their arms, and some had gone to Idlib”, — he stressed. “Most had gone to Idlib where they can live with their fellow terrorists,” — said the President of Syria. “Now in Idlib tens of thousands of terrorists,” he said.

The return of refugees

Assad also said that the issues of accelerating the return of refugees to Syria are the main topics for discussion between Damascus and Moscow. “This is the main topic of discussion between the Russian and Syrian governments as to provide maximum assistance to help accelerate the process of return of refugees to Syria”, — said the head of the Syrian state.

“We would like to every Syrian returned to Syria, especially since, when terrorism was defeated in Aleppo at the end of 2016,” — said Assad. “Now we are more actively beating back the terrorists, and the majority of the Syrian territories have them released. So we call on the refugees, mostly Syrians, who had their own business, to return,” he said.

According to the President, over the past six months in Syria returned several thousand people. “The problem here is the destruction of the infrastructure, their homes and dwellings, he explained. — I mean that the necessary basic things in order to continue a normal life.” “They can’t just go back and not to do anything. That is why our government is doing everything possible to rebuild infrastructure, but this is not enough,” — admitted the Syrian leader. According to him, “you should also think about the recovery of the economy, jobs, the construction of schools and first of them [refugees] houses so they have somewhere to live”.

Answering the question about how much can take time this process, the President replied that it depends on the desire of the refugees themselves. “Because some of them think that it was too early. They want Syria was completely liberated from the terrorists,” he said. “So this is a subjective question, every person solves it alone. But the process has already started, and people come back,” he said.

Assad also stressed the importance of the visit of the families of the victims of war from Russia. In his opinion, such a visit would “contribute to the unification of the people.” “In Syria we belong to the families who have participated in the fight against terrorism, in different parts of the world, as heroes,” stated Assad. “But today the battle takes place in Syria. These men [the Russian soldiers] were protecting the Syrian people and protect the Russian people, as well as security and stability in other regions of the world,” he said.

According to the President of Syria, was “very important to meet with these families.” “Because we are proud of them and I think they are also proud of their brothers, fathers, husbands, wives, or mothers” — of the decree Assad. In addition, “the arrival in Syria in order to see the battlefield, the reality of the environment that killed their relatives, give them a reason for pride for their loved ones,” he said.

Assad recalled that relations between the Syrian and Russian peoples have a long history. “They go back to the 50th years of the last century, and today we have a mixed marriage, in which a Russian father and a Syrian mother, or Vice versa, a Syrian father and a Russian mother, we have a new mixed generation, so this is an old settled communications”, — he drew attention.

According to Assad, “now, in Russia, and in Syrian society understand that they are fighting against the same enemy — terrorists, they know their enemy for a long time was the terrorism itself”. So, suggested he visit the families of the dead Russian soldiers “will shed more light on the problem of terrorism, to help people who are not confronted every day with the war to understand why are the Russians dying, what are these heroes side by side with their brothers of the Syrian heroes”. “Of course, it will help unite people”, — concluded the President of Syria.