TASS, 26 July — the Leaders reaffirmed their commitment to the principles of mutual respect, sovereign equality, democracy and cooperation. 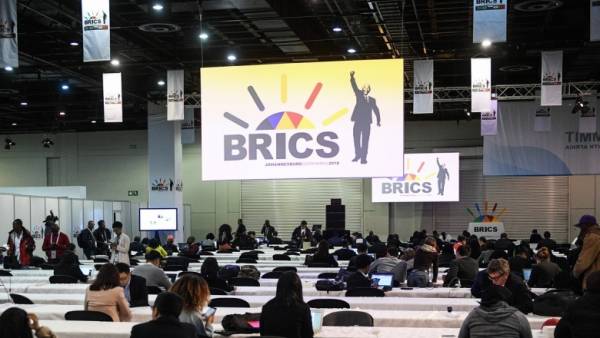 The heads of state and government, encouraged by the successes of the BRICS over the past ten years.

“This is convincing proof that the purpose for the Association is to ensure peace, harmony and common development and prosperity,” the document says. Leaders reaffirmed their commitment to the principles of mutual respect, sovereign equality, democracy, inclusion and the strengthening of cooperation. “Based on the results of the previous BRICS summits, we will continue to expand our strategic partnership to the benefit of our peoples through peace, a more just international order, sustainable development and inclusive growth and intend to strengthen cooperation in three key areas in the field of economy, peace and security and humanitarian exchanges“, — the document says.

“We reaffirm our commitment to global peace and stability and support the Central role of the United Nations, purposes and principles enshrined in the UN Charter, respect for international law and the promotion of democracy and the rule of law”, — said the leaders.

“We reaffirm our commitment to maintain the principles of multilateralism, and work together to implement the Goals of sustainable development for the period until 2030 while we promote the formation of more representative, democratic, equitable, fair and just international political and economic order” — the document says.

The heads of state expressed their determination to work together to strengthen multilateralism and the rule of law in international relations, to promote the establishment of a fair, just, equitable, democratic and inclusive international order.

The situation around the status of Jerusalem

Leaders of the BRICS countries stated the need for renewed efforts to achieve a comprehensive resolution of the Israeli-Palestinian conflict and the need to define the status of Jerusalem through negotiations between Palestine and Israel.

“We reiterate that the status of Jerusalem is one of the “final status issues” to be determined in negotiations between Israel and Palestine,” — said in the text of the Declaration.

The BRICS leaders agreed that the conflict in the Middle East and North Africa should not be used as a reason to postpone settlement of the longstanding conflicts, especially the Palestinian-Israeli. “We reiterate the need for renewed diplomatic efforts to achieve a just, lasting and comprehensive resolution of the Israeli-Palestinian conflict to achieve peace and stability in the middle East based on the relevant UN resolutions, Madrid principles, Arab peace initiative and the previous agreements between the parties reached during negotiations on the establishment of an independent, viable, territorially contiguous Palestinian state living next to Israel in peace and security”, — stated in the text of the document.

As for the situation in Gaza, the BRICS leaders reaffirmed their support for the resolution of the UN General Assembly on the protection of the Palestinian population and called for its strict implementation.

The denuclearization of the Korean Peninsula

In the text of the adopted Declaration also States that the BRICS countries reaffirmed their commitment to full denuclearization of the Korean Peninsula by peaceful political means.

“We welcome recent developments to achieve the complete denuclearization of the Korean Peninsula and maintaining peace and stability in northeast Asia, — the document says. — We reaffirm our commitment to a peaceful, diplomatic and political solution to the situation.”

On 12 June, Singapore hosted the first ever summit between the US and the DPRK. The President of the United States Donald trump and North Korean leader Kim Jong UN on the outcome of the negotiations was signed a joint document. In it, Pyongyang announced it was ready to go the full denuclearization of the Korean Peninsula, and the US has pledged in response to provide the DPRK with security guarantees.

The arms race in spacein addition, the BRICS leaders expressed concern about the prospects of a possible move of an arms race in outer space, and the space became the arena of military confrontation.

“We Express serious concern over a possible arms race in outer space and its transformation into an arena for military confrontation, the Declaration reads. — We reaffirm that the prevention of an arms race in outer space, including the deployment of weapons, will help to avoid a great danger to international peace and security.”

The parties stressed the paramount importance of strict compliance with existing regulations and providing for the peaceful use of outer space and reaffirmed the need to consolidate and reinforce that regime. “We emphasize that the practical measures of transparency and confidence-building measures can also contribute to the prevention of placement of weapons in outer space, — stated in the text of the Declaration. — We reaffirm that the UN Conference on disarmament as the sole forum for multilateral negotiations on disarmament, plays a key role in the negotiations on an international agreement or international agreements, if necessary, on prevention of an arms race in outer space in all its aspects”.

The fight against chemical terrorism

The paper also noted the need to launch multilateral negotiations on the international Convention for the suppression of acts of chemical and biological terrorism, including in the framework of the UN Conference on disarmament.

The leaders strongly condemned the continuing terrorist attacks, including some BRICS countries. “We condemn terrorism in all its forms and manifestations, regardless of where and by whom was a terrorist act”, — stated in the text of the document.

The heads of state urged to unite efforts in combating terrorism under the auspices of the United Nations on the basis of a strong international legal framework and expressed confidence that a comprehensive approach is necessary to effectively combat terrorism. “We recall the obligation of all States to prevent the financing of terrorist networks and terrorist acts from their territory”, — stated in the Declaration.