The Russian Embassy in the US responded to the “Crimean Declaration” of the state Department. 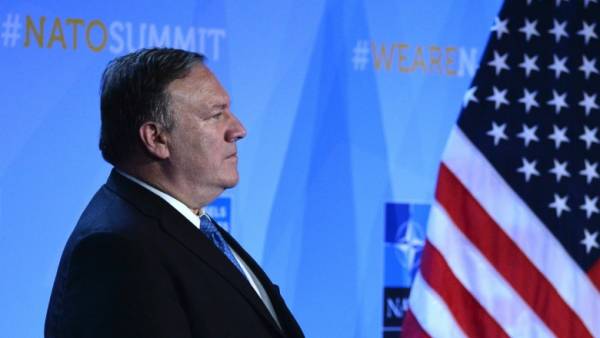 U.S. Secretary of state Mike Pompeo has reported to us congressmen about the recent Helsinki summit between the presidents of Russia and USA Vladimir Putin and Donald trump.

Pompeo declined to disclose details of the negotiations, assuring the senators that U.S. policy toward Russia remained unchanged. He also promised that Washington will not relieve Moscow of sanctions as long as the Crimea is part of Russian Federation. The Russian Embassy in the United States, commenting on the statements Pompeo noted that there is nothing new, the Secretary said.

I can tell you that the policy of sanctions against Russia remains the same. Sanctions remain in force.Mike Pompeo U.S. Secretary of state

The question is, did the discussion on this topic in the framework of the meeting, Pompeo refused to answer.

The Russian Embassy in the United States in response said that “nothing new” is not heard.

“Declarations and statements on Crimea, the state Department performs a quarterly basis. Nothing new we have not heard. Was just making sure that the partners live in a different reality”, — stated in the message of the Russian Embassy.

Representatives of the Embassy noted that the U.S. government turn to international legal norms and the right to self-determination, but these same principles were the basis of the annexation of Crimea to Russia. The diplomatic mission stressed that “hundreds of thousands of Ukrainians” come to rest in the Crimea that does not fit into the myth “about the Russian “occupation” and “aggression”.

Originally the hearing was planned precisely in order that the senators were able to learn what Putin and trump was talking in Helsinki during a conversation in a tete-a-tete, which lasted two hours instead of the originally planned one and a half.

I’d like to know what topics trump decided to raise with Putin at talks in Helsinki in two hours. About the negotiations, we know very little, except that Russia itself has published and described. Chris Consentor the United States from the state of Delaware, Democrat

Before the hearing, Pompeo was full of enthusiasm about the upcoming conversation with senators, declaring that his speech “will show the world benefits from meeting the US President Donald trump with the President of Russia Vladimir Putin”.

“I look forward to the speech tomorrow, I will speak on many issues in the Senate, including Russia. One of those things that is lost in the question of relations of Russia and the United States, it is the desire of the current administration to prevent malicious activity in Russia. You know that such steps and other administrations throughout the cold war. I’ll be glad to discuss this issue,” said Pompeo, answering a question of journalists as it relates to the meeting with the congressmen.

Contrary to the expectations of Congress, Pompeo refused to disclose the details of the conversation between the two leaders. “I’m ready to talk about what topics were discussed. And I can tell you about what is the official position of the U.S.,” said Pompeo senators, requiring him “to answer a simple question.”

According to him, this is necessary in order to preserve the possibility for future conversations in a tete-a-tete. “After all, you may have expectations that there will be other talks tete-a-tete… you think You can do it again, because want to achieve real progress in the future,” he explained his position.

However, specifics on the meeting, it was too much.

Pompeo began his speech with a statement that the U.S. will never recognize Crimea part of Russian territory.

“Sanctions against Russia will not be weakened as long as the Peninsula will be under the jurisdiction of Ukraine,” said Pompeo, and then quoted from published for a couple of hours prior to the hearing “Crimean Declaration” is a formal document that defines the non-recognition of the Crimea part of Russia, the official policy of the United States.

“As we did in the case of Declaration of Welles 1940, the United States reaffirm that their policy is the waiver of claims of the Kremlin on the sovereignty over the territory occupied by force in contravention of international law. Together with allies, partners and the international community, the United States rejected Russia’s attempt to Annex Crimea and promised to maintain this policy as long as the territorial integrity of Ukraine is restored,” reads the document signed by the Secretary of state.

In General, discussion of the Crimean issue and the Ukrainian crisis, according to Pompeo, was not the most productive part of the meeting. As noted by the Secretary of state, the presidents “agreed to disagree” on the Ukrainian question.

Other issues concerning Russian-American relations was also raised issues of cooperation in Syria, “the Russian intervention” in U.S. elections and the actions of the INF and start I treaties 3.

Pompeo has repeatedly said that the summit in Helsinki did not affect the U.S. position on any of these issues, and the policies of Donald trump in relation to Russia is much tougher than its predecessors.