MOSCOW, 26 Aug — RIA Novosti. In the Internet appeared the frames from the ceremony photography at the BRICS summit, which none of the leaders got up in front of the flag of their country. 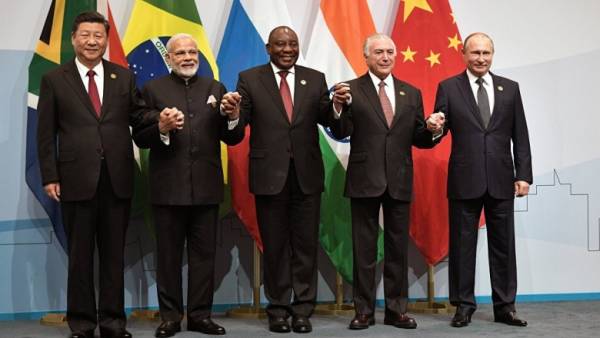 The confusion occurred because of an error of the organizers. In the comments to the video users said that the heads of state took place in accordance with standing floor signs.

Noticing the error, the policy was reversed, but their situation still did not meet in back of them flags. So, the Chinese leader, XI Jinping stood in front of the flag of South Africa, Prime Minister of India Narendra modi before the Brazilian, South African President Cyril of Ramaphosa — in front of the Russian flag, Brazilian leader Michel Temer is located at the flag of India and the President of Russia Vladimir Putin — next to the Chinese.

“Guys are excited, they can,” he joked in comments to the roller.

In South Africa, from 25 to 27 July summit of the BRICS. After the conference, the leaders of the group will sign the Johannesburg Declaration on the results of ten years of work of the organization.