Zakharov commented, “the Crimean Declaration” of the state Department

MOSCOW, 25 Jul — RIA Novosti. The official representative of Russian foreign Ministry Maria Zakharova said published by the U.S. Department of state “Crimean Declaration,” comparing it to the agreement on the Iranian nuclear program and the Paris climate agreement from which the United States withdrew the decision of President Donald trump. 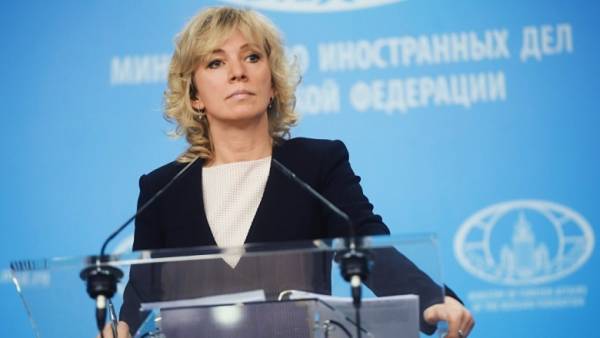 “But a Joint action plan on Iran’s nuclear program and the Paris climate agreement recently was the official policy of the United States. Personally (former President Barack) Obama decided that. And then the tramp took it and changed their minds. We know the price of this “momentous declarations,” wrote Zakharova in Facebook.

The US President Donald trump on may 8 announced that Washington is out of agreement with Iran on its nuclear program. Trump announced the restoration of all sanctions against Iran including secondary, that is, against other countries doing business with Iran.

Crimea became a Russian region after held there in March 2014 referendum in which 96.77% of voters of the Republic of Crimea and 95.6% of residents of Sevastopol voted for joining Russian Federation. Crimean authorities held a referendum after a coup in Ukraine in February 2014.

Ukraine still considers Crimea its but temporarily occupied territory. The Russian leadership has repeatedly stated that the inhabitants of Crimea democratically in full compliance with international law and the UN Charter voted for reunification with Russia. According to Putin, the Crimea issue “is closed permanently.”