Paper twist: where did the thousands of Russians without documents

Why tens of thousands of citizens of the country need a “passport Amnesty”. 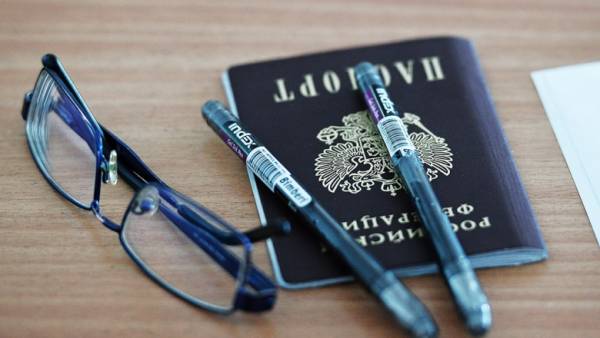 At least tens of thousands of Russians live without a passport due to the fact that their names not been found in database migration services. Mistakes were made in the 1990s, however, citizens suffer still. The cancelled passports were and 4 thousand inhabitants of the Crimea. It’s time to hold “passport Amnesty”, said the Ombudsman Tatyana Moskalkova. As people find themselves without any identity documents in their own country and why the current 2012 Amnesty not enough material portal iz.ru.

The Commissioner for human rights Tatyana Moskalkova believes that in Russia it is necessary to conduct a “passport Amnesty”. Shall have to get the “good citizens” of the country left without a passport for different reasons. First and foremost it is about people who have cancelled and received in the 1990 law because of the violation of the order of registration.

“To me, for this reason came the people caught in this situation, and human rights”, — said the Ombudsman in an interview with RBC, published on Wednesday, July 25. In her opinion, the approach of Amnesty should be differentiated: each case must be considered individually. Otherwise it may happen that the state will encourage violators.

Estimates of the number of Russians without passports vary widely, from tens of thousands submitted in the databases of the Federal migration service, up to a million — this figure was obtained according to the census. “Why do these citizens do not have passports — difficult to say: lost, forgot to change,” — said Moskalkova. She recalled that the relevant agencies are working on creating a registry of persons without documents.

The numbers in the “tens of thousands” July 16 was announced by the first Deputy interior Minister Alexander Gorovoy at the meeting on improving migration legislation in the Federation Council.

According to him, the interior Ministry a year and a half working on a bill that would allow the people of Russia without passports to get a likeness of the cards that would allow us to obtain medical and social guarantees, and also to get a job from the main document. According to the concept of law enforcement, they have prepared a law should come into force in June 2019.The first wave

In the 2000s began to recognize passports of Russians invalid. Under the distribution were many good citizens, which at the time of receipt of the document in 1992 was not registering. Among them were many citizens of former Soviet republics who fled to the territory of Russia in the early 1990s. In 2009, this problem has been the Prosecutor General’s office. The Supervisory authority criticized the actions of the Federal migration service, prohibiting arbitrarily deprive people of their citizenship and leave them without documents on hand. Prosecutors pointed out that the replacement of passports of citizens of country are forced to confirm citizenship.

Discovery of documents not provided for by law, contributes to corruption and abuse of official position in the territorial bodies of the FMS, and creates social tensions in society in the mass violation of the rights of citizens, which is unacceptable.Statement Of Attorney General

In the same year the Russian government started simplifying procedures for obtaining citizenship for Russian speakers living abroad, former citizens of the USSR.

What’s inside of passports of citizens of different countries (photo)

In 2012 entered into force the law on “passport Amnesty”. He helped to legitimize the citizenship of tens of thousands of residents who received passports in the period 1991-2002 and then lost them when changing documents without exception were declared invalid. The reason for this was that when citizenship officials have not made them to the matching base. In many cases, as noted by parliamentarians, it was neglected in the embassies of former Soviet republics — they have provided the documents for registration of the passport of the citizen of the Russian Federation.

“In 90-e years there were cases when people received the passport and in the database they were not made. Whether this day there was no light, whether the employee was… not very operational, but it turned out that the passport of the citizen of the Russian Federation the person is, and in databases it is not, — explained the President of the Council under RF President on development of civil society and human rights (HRC) Mikhail Fedotov. — This means that it is impossible to get a job, something to draw, to travel abroad — nothing!” The human rights activist noted that the adoption of the amendments, called to restore the rights of more than 60 thousand people.