“They ate my girlfriend.” As the legends about sea monsters turned out to be true

Only in the XXI century it became clear — the ancient monsters exist, and the legend of the Kraken, of course, an exaggeration, but not complete fiction. 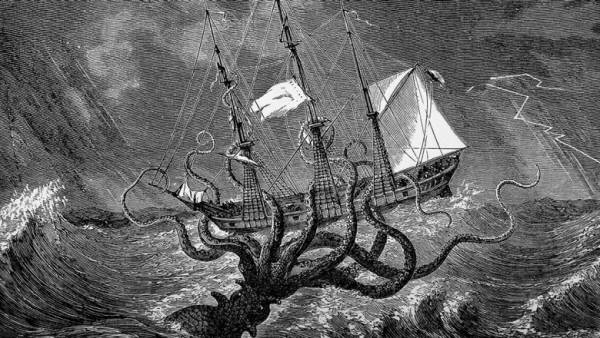 …July 23, 2002 on the island of Tasmania (located just to the South of Australia) sea washed ashore the corpse of a huge monster. Springy white and purple torso stretched ugly head with a sharp beak and eight tentacles, each with a length of 15 (!) meters. As it turned out after lab research, a hideous creature weighed 250 pounds. Soon, scientists said — found in the Tasmanian sea beast in life was hunting a very large opponents: capturing their tentacles with strong suction cups, it attracted the victim to the beak, and literally crushed into mincemeat “radula” — language similar to saw.

The monster turned out to be the giant deep-sea squid, the existence of which in Europe went to chilling legends already since the fourth century B. C. E. then the Greek philosopher Aristotle (and after the Roman historian Pliny the Elder) first talked about the “sea reptile” head the size of a barrel and “arm” length is “five cubits”. In the thirteenth century Icelandic Saga “the arrowhead” told about a certain establishment, capable of swallowing a fleet of Vikings. A monster called hafgufa — “sea mist”, but further entrenched the word of the Norwegian language — “Kraken”: means a sick animal, or (depending on dialect) something perverted.

Grabs and drags to the bottom

…Tales of the Kraken were circulated in more enlightened times. For example, the Danish Bishop-naturalist Erik Pontoppidan in his book “History of nature of Norway” (published in 1752) argued — there are many witnesses of the horrific attacks of the Kraken. This creature single-handedly pulled to the bottom, even a battle ship with guns, masts criss-crossing tentacles. After the sinking of the ship, the Kraken ate people — and after the “feast” three months to digest the received food.

Moved the monster is always accompanied by a myriad of fish feeding on the remnants of his terrible “lunch” — so fishermen, rejoicing in the rich catch, you should be careful.

In 1774, British captain Robert Jameson testified under oath at the trial that his eyes saw a huge monster — almost 2.5 kilometers in length and 9 meters in height, which then sank, then looked out to the sea: soon the water was full of cod. In 1802 the French scientist Pierre Denys de Montfort confirmed the court’s stoked as Kraken, and a giant octopus living in the waters of the southern hemisphere. Shortly before the trade ship from Saint-Malo sank off the coast of Angola after the attack powerful creatures with tentacles. The surviving sailors swore they saw the octopus.

Amazingly — though in 1857, the scientists proved the existence of giant squid (“architeuthis”), living at depths of one to several kilometers, in the enlightened twentieth century, the stories of the Kraken were still inventions of the ignorant cowardly sailors with poor eyesight. In 2004 alone, Japanese ichthyologists managed to take photos and video live underwater monster.

Individuals were struck by its size — up to 26.5 meters (!) in length, weight about 450 pounds. When the body weight is not so difficult to imagine how the monster tentacles twist around the boat, and drags along with people in the depths of the ocean.

There is another evidence in favor of the legends about the Kraken — in addition to squid, confirmed the existence of giant deep-sea octopus: though not of this size, “only” 8 meters in length. The Sprut ship doesn’t sink, but a fishing boat or even the boat — easily. Those and other creatures during hunting are extremely aggressive and love to attack a flock of unknown objects. Even a two-meter (weighing poltsentnera) individual so-called “Humboldt squid” often attacks people: the famous giant squid attack on a diver in 2009, nearly led to the death of a person. The bill is of monsters can cause strong wounds, and swimmer’s risk of dying from blood loss or pain.

In 1971, near the coast of New Zealand which came from nowhere a flock of giant squid tore travelling on the boat a couple who decided to swim in the sea. Survived only a young man, endlessly repeating then the rescuers “They picked and ate my girlfriend!”.

During the download an error has occurred.Scary sea spider

…So, the Kraken and right existed in reality? Yes. And more than that — probably on the planet there are individuals much more and worse. In the famous “Challenger deep”, the deepest part of the Mariana trench (500 km from the island of GUAM), the distance from the water surface to the bottom is 11… kilometers. To the bottom of “abyss” in 2012, went down in the bathyscaphe, the Director of “Titanic” and “Avatar” by James Cameron.

It is in such places and are sinister creation, which modern science is almost unknown, and get their bodies to explore only during rare incidents, when the body of a monster floats to the surface.

Scientists assure us is a part of the system, “deep sea gigantism”, where marine animals living at a depth of 1-7 kilometers, reach much larger sizes than their floating counterparts upstairs. Here and terrible sea spider with its long legs, and huge crayfish amphipod and isopod (76 cm and 1.7 kg of weight), and fish “oarfish”: reaching up to 11 meters and resembling a long ribbon. Only a pitiful percentage of creatures living in the darkness at the bottom of the ocean, known to science.

During the download an error has occurred.Saber, floating in the darkness

…By the way, many medieval legends described the spectacle of an epic battle at sea, the sperm whale and the Kraken. It turns out, is also true! The first “hands” of deep-sea squid came to the researchers in the XIX century they were removed from the stomachs of dead sperm whales by whalers. In addition, there were found a head with a hefty bill. In the battle with the whale squid the poor man is doomed — the battle is over 99% in favor of clever whale, able to tear the enemy to pieces and swallow like a sandwich for Breakfast. Interestingly, the monster with tentacles (in particular, the aggressive Humboldt squid), can “talk” to each other, changing colors: true, “language” failed to decrypt. As a rule, all deep-sea animals are evil — well, there’s nothing you can do, harmful environment. Living in the dark at a water temperature of minus 2-4 degrees: of course, nothing other than a predator, in such conditions it will not. Take the longhorns saber-tooth — spooky rabisu, living in the darkness at depths up to five kilometers from the spikes on the head, fangs and weighing in at 120 pounds. Or Melanie Johnson — monster with a mouth full of shark teeth, with “flashlight” on the head. You meet a week you will not sleep.

…Yes, but why in the middle ages, giant squid and octopus actively attacked the ships, and now it’s completely stopped?

Scientists and historians give a simple answer — early in habitats of monsters (in the North, around Iceland and in the South, closer to New Zealand) there was a submarine volcanic activity, forcing the monsters to appear on the surface.

Since the end of XVIII century submarine eruption at greater depths are rare. Well, the environment will not go away — in the ocean’s rapidly declining populations of rare fish and other animals. Before the Kraken ate people, and now we can say, the man ate marine life without a trace. Even the whales are quite rare drown the little court, and in the nineteenth century attack of the giant fish was the norm. It remains only to say — cynical modern people didn’t believe the stories of grizzled sailors of centuries past about the creatures, giants, inhabiting the dark depths of the sea. Maybe the message of the Phoenician sailors about the mysterious sea dragons, who burned the ships fiery breath, too, right? Who knows. Humanity is not aware of the grim lives of our neighbors at the bottom of oceans.