U.S. Ambassador in Russia said, why didn’t he resigned after the summit in Helsinki

NEW YORK, July 23. /TASS/ John huntsman said that he trusted the opinion of his colleagues who advised him not to resign. 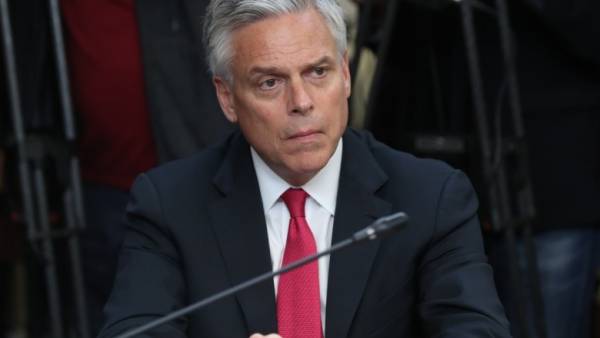 U.S. Ambassador to Russia John huntsman refused to heed the call of the American journalist and resign after the summit Russia — the USA in Helsinki. As explained by the huntsman in an article published Saturday in the newspaper the Salt Lake Tribune, he trusted the opinion of my colleagues, diplomats, advised him not to resign.

I spent unscientific sociological study among his colleagues about whether I should resign. Their laughter told me all I wanted to know.John Huntsmaster of the USA in Russia

He also referred to the opinion of their sons serving in the ranks of the U.S. Navy. “Their words, when I asked them whether I resign, was unprintable”, he continued.

The diplomat invited the journalist Robert Gerke to come to Moscow and meet with the staff and the staff of the U.S. Embassy. “They focus on the work that needs to be done to stabilize the most dangerous relationship in the world, covering nuclear weapons, fighting terrorism, stopping the bloodshed in Ukraine and of unyielding [resolve] the Syrian crisis. Their loyalty to the service of his country above politics and inspires me deeply,” explained the huntsman.

The home of the President of the United States Donald trump criticized for his insufficiently tough stance against Russia attributed to interference in the presidential election of 2016 and the fact that he questioned the conclusions of the U.S. intelligence community on this. With criticism of the President had to be not only the liberal media and the Democrats, but many of the party members trump. Democrats also demanded to extend the record of an American translator who was present at the meeting trump with Russian President Vladimir Putin in a tete-a-tete in Helsinki.