Scientists have discovered the remains of a baby snake age of about 100 million years (mid Cretaceous). They are preserved in a piece of amber found in Myanmar. It is the most ancient known to scientists Hatchling snakes and the only found species that lived in the forest area in this period of Earth’s history. The results of the analysis presented in the journal Science Advances. 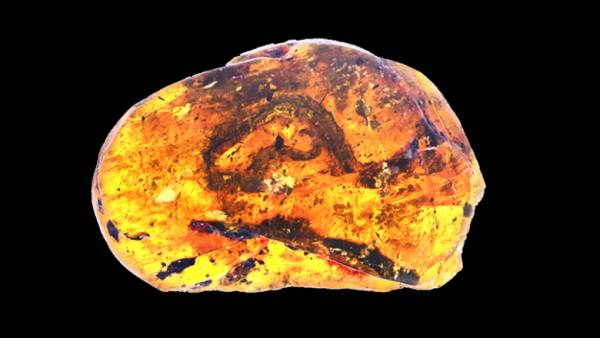 The oldest snake fossils belong to the late Jurassic and early Cretaceous periods (67-140 million years ago). By the time the remains are not yet fully deprived of their limbs, but other characteristic of the serpent anatomical features, for example, the structure of the skull. According to one hypothesis, the snake decided to abandon the feet in the transition to living in burrows where it is inconvenient to navigate with the help of splayed limbs, characteristic of reptiles.

New snake species received the name Xiaophis myanmarensis, managed to grow up to five centimeters. The authors compared the anatomy of the bones of a new species with well-known representatives of the suborder serpents in order to determine the evolutionary relationships of reptiles. They come to the conclusion that this species apparently evolved from marine snakes. Because of this, we can conclude that snakes moved from coastal areas to forests much earlier than paleontologists previously thought. They also found that development of the bones of the spine these reptiles has changed little in millions of years.

The discovery will help to study and the growing up of snakes. The spine and spinal cord of the baby was one of the last stages of development of the young snakes, which allows scientists to compare how this process occurs in modern snakes and their ancient relatives. The authors note that all previous findings of the snakes from the middle Cretaceous period was made on the shores of the ancient waters. A new discovery indicates that by this time the snake had already occupied much more of the ancient niches in the ecosystem.