Ukraine sums under the decree

Sanctions can affect a few hundred individuals and legal entities. 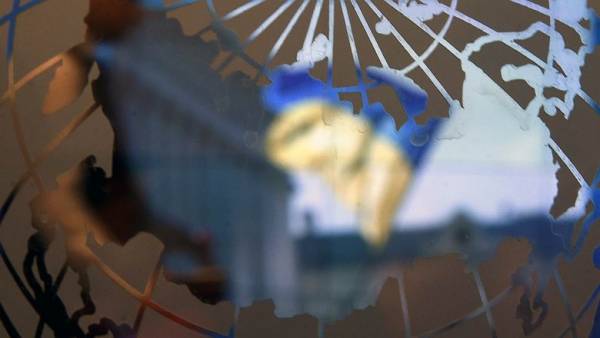 As it became known “Kommersant”, the government is developing sanctions against Ukraine, which then approves Vladimir Putin. Under the restrictions should hit a few hundred individuals and legal entities, including business leaders and Kiev officials. One of the measures of impact should be the blocking of their assets in Russia, say Kommersant’s sources in the White house. But perhaps the impact of sanctions on their helpers would be symbolic. For example, according to “Kommersant”, the sanctions may relate to fertilizer producers, but imports of these products in Russia is negligible, and the Russian deliveries to Ukraine Kiev and successfully blocks their sanctions.

The government began efforts to reduce the negative impact on the economy of the Russian Federation in connection with introduction of sanctions. One element of this work will be the presidential decree on sanctions against individuals and legal entities of Ukraine, say Kommersant’s sources in the White house.

According to them, in the sanctions list plan to include “several hundred individuals and about one hundred of legal entities”.

Individuals “refers to businessmen, politicians and civil servants”, one of the measures to be blocking their assets in the Russian Federation and the prohibition on withdrawal of capital, said the source “Kommersant” in the government. For writing a list of legal entities responsible Ministry of Economics, Ministry of industry and trade and the Ministry of Finance (coordinating the work of the first Deputy Prime Minister Anton Siluanov).

By 1 August, these agencies must submit “proposals for imported Ukrainian goods in respect of which can be applied retaliatory measures of a restrictive nature.”

The imposition of sanctions in respect of Ukraine will take place in accordance with the decree, which Putin signed on June 4. According to him, “sanctions” are imposed by the government on the President’s decision against foreign States and their organizations, officials and citizens. The law has established not a very long list of possible restrictions. These include, for example, termination or suspension of cooperation of Russian companies with “unfriendly” foreign countries and organizations in various industries, as well as the “prohibition or restriction” on the importation of products and raw materials, countries of origin which are of a foreign state. A similar ban can be installed on the export of raw materials from Russia organizations “under the jurisdiction of unfriendly foreign countries.” In the law there is a clause that, in accordance with the decision of the President can be introduced and “other measures” of exposure.

A Kommersant source in the leadership of one of the agencies claims that the question of introduction of sanctions against individuals and legal entities of Ukraine was on the agenda in 2014: its early adoption were primarily the representatives of the power block, but the restrictive measures of this kind it was decided to “save money”. The draft presidential decree to be specific, but leave room for maneuver, says Federal official: it is inappropriate to put all the measures in the course simultaneously.

Source “Kommersant” in the government emphasized that Russia’s actions “mirror response” to similar steps by Ukraine. Today in the sanctions list of Ukraine are 1748 individuals and legal entities. 756

The last time this list was extended by decision of the meeting of the national security Council and defense of Ukraine, held on may 2, issued in the decree of the President of Petro Poroshenko on may 14. In the Ukrainian black list includes not only Russians and Russian companies, and foreign individuals and legal entities, in one way or another involved in the action, which Kiev considers illegal (for example, European politicians who visited the Crimea since March 2014). However, the Russian citizens and structures in the majority. In particular, the Ukrainian sanctions have affected members of the state Duma and the Federation Council, employees of the presidential administration, high-ranking representatives of the Ministry of defense and the Russian secret services, diplomats, judges, big businessmen. Appears in them, and a number of cultural figures, scientists, and members of the media. All of them denied entry to Ukraine and their Ukrainian assets (if any) shall be confiscated. Most of the sanctions imposed for a period of three years.

According to the source “Kommersant” in the White house, the sanctions in the first place may relate to Ukrainian companies—producers of fertilizers.

Kiev has repeatedly, including the filing of the local competitors, have imposed restrictions against the supply of fertilizers from Russia, but it was the standard anti-dumping measures. May and previous sanctions Ukraine have affected the Russian PhosAgro and EuroChem, but indications of possible counter-sanctions Russia by sector look very strange, say Kommersant’s sources in the industry. The supply of fertilizers from Ukraine to Russia and the EEU are negligible — about $1 million in 2017, while exports from Russia to Ukraine in 2017 amounted to 870 thousand tons of nitric fertilizers at $206 million, mixed — 2 million tons for $520 million (for phosphate and potash fertilizers it is extremely insignificant). The head of PhosAgro, President of industry Association brine Andrey Guriev recently told Bloomberg that the export of fertilizers from Russia to Ukraine is 3.6 million tonnes — is 80-90% of the needs of the country after the may sanctions, the price of these products there increased by 30%, and the main Russian producers stopped supplying.

The Russian imports from Ukraine in 2017, was, according to the EEU, about $4.9 billion (in January—may this year, according to the FCS, it fell by 39%, to $2.2 billion), while the main volumes fall on aluminum raw materials (probably is the supply of the Nikolaev aluminous plant RUSAL), steel and engineering products. Interlocutors “” among metallurgists do not see any problems with imports of steel from Ukraine, noting that since the beginning of year the volume decreased. They have not heard that Ukrainian steel products have been subject to counter-sanctions. While Ukrainian investors of assets in Russia, which could be block, very little, one of the rare examples is the company “Titanium investment” Dmitry Firtash, who owns “Crimea Titan” in the Crimea, but the sanctions it has already imposed the Ukraine.