MOSCOW, 19 Jul — RIA Novosti. The President of the United States Donald trump in a Fox News interview said that new NATO member, Montenegro could drag the Alliance into a Third world war. 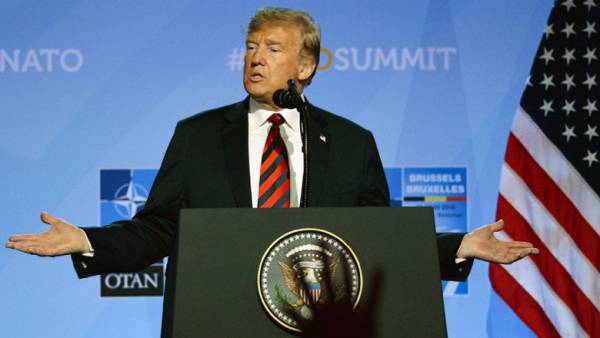 During the interview, trump accused the citizens of Montenegro to “aggressiveness”. According to him, Montenegro is a tiny country with a “very aggressive people.”

“They can get angry, and, congratulations, you have the Third world war”, — said the American President. In addition, trump questioned the need for collective defence of the countries-members of NATO, under the fifth article of the North Atlantic Treaty.

In his view, US troops should not protect Montenegro, because “it is unfair because they don’t even pay”.

However, he acknowledged that the Charter, the Alliance will have to protect Montenegro in case of a military conflict.

Trump says he’s bothered by NATO of provisions that require the US to come to the defense of other member countries. pic.twitter.com/2xY1FjBTSn

Montenegro officially became the 29th member of NATO in early June 2017. A significant part of the population of the former Yugoslav Republic opposed the accession to the Alliance, the country held protests.

Montenegro has been under continuous pressure by Russia for more than a decade. Russia even tried to assassinate their President. Trump’s comments weaken NATO, give Russia a license to cause trouble and thereby actually increase the risks of renewed conflict in the Balkans.