Sanctions will answer point by point

The economy is prepared for a system response to external action. 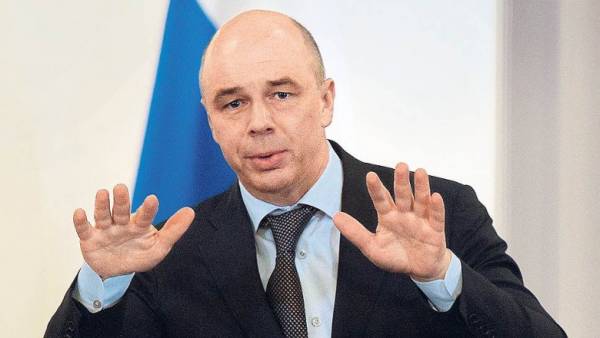 The Finance Ministry has prepared a plan of measures to bring anticyclonic laws and regulations in systematic form. Approved in early July at a meeting with first Deputy Prime Minister Anton Siluanov, the document suggests, in particular, support the work of sanctioned companies in the domestic financial and bond markets, seeking ways to provide their foreign trade activities and the harmonisation contraction measures taken in the winter of 2017-2018. Then the White house was preparing to expand sanctions from the United States in an atmosphere of secrecy, now, judging by the development of the Ministry of Finance, it began to interfere with the support of individuals and companies that applied or may be applied to the external restrictive measures.

“Kommersant” familiar with the government’s plan of measures to reduce the impact of foreign sanctions on the Russian economy. The document of the Ministry of Finance was approved at a meeting with first Deputy Prime Minister Anton Siluanov in early July. Protocol in the White house until the end of July should appear, the working group on countering sanctions, the Ministry of Finance will receive powers on development of such measures in the financial sector and with the Ministry of industry and Ministry of economy will study the feasibility of introduction of utilization fee for foreign products, analogues of which are in Russia, and the FAS and the Ministry of economy will study the feasibility of changes of the legislation “to lower dependence of the Russian economy by foreign patent holders”.

The list of retaliatory measures approved by the government, includes five thematic blocks and 17 points.

First block of the external economic calculations is the development by August 2018 plan to reduce the use of the dollar in foreign trade transactions in favor of settlements “mainly in the national currency”. Probably part of that plan is the active reduction of the Central Bank since April the share of reserves placed in us Treasury bonds. Also already agreed with the Central Bank is to release the sanctioned individuals from penalties for failure to return foreign currency earnings (the bill passed its second reading) — it is expected that the measure will work from October 2018.

The second block of the plan is dedicated to the access of the companies subjected to in the domestic financial market. In fact, it refers to the partial isolation of the latter from the influence of external decisions: in July of 2018, the Ministry of Finance and the Central Bank will report to the working group on how to ensure in the Russian Federation free circulation of securities of issuers sanctioned.

“Antitrust” block is designed to limit “unfair competition from foreign countries” and includes the ability to import restrictions (in accordance with the already adopted by the state Duma 127-FZ on countering the “hostile actions of the United States and other countries” — it is proposed to strengthen the decree of the President and acts of the government). In this direction also already increased duties on certain goods from USA, import restrictions, the Ministry of Finance proposes to expand due to the prohibition of individual purchases of foreign goods by the government and state-owned companies.

Work should be completed by September, and the situation with imports is monitored on a quarterly basis.

Also, the White house intends to systematize measures to restrict access to information about the companies, the risk to fall under sanctions: by August to improve the banking legislation by September to expand the government’s right to choose what information it can close. Providing the possibility not to publish separate data on public procurement and procurement by state companies — the de facto government has implemented it at the end of 2017 — was also included in the plan and the conclusion of the state defense order on a separate trading platform.

Note that part of the plan for ensuring information secrecy are activities to dismantle already taken at the end of 2017 measures. So, the Finance Ministry proposes to remove the secrecy stamp and the chipboard pack orders and resolutions of the White house with lists of companies and data that are not to be disclosed (perhaps the secrecy is beginning to create problems in the performance of these instruments) and to cancel the government order No. 52-p of January 20. Document not available in the public databases, the need for its cancellation is due to the need to “eliminate the risk of permanent backwardness of regulation from changing sanctions lists” — we can assume that the document contains a fixed list of companies, released from a number of requirements to disclosure of data.

Included in the plan and the bill of special administrative regions (SAR), adopted yesterday in the first reading by the state Duma. The idea of special administrative regions for re-registration of companies under sanctions (which would also allow them not to reveal to the outside world data on the structure of ownership), yesterday called a formal objection of the Central Bank.

The Bank of Russia has declared that banks, non-financial credit institutions and payment systems should not become residents of the SAR, as it threatens the stability of the financial system of the Russian Federation and contrary to multiple blocks of the banking law.

Measure’ve got to block, “other”, along with the necessity of finding ways to guarantee support of export of individuals on the sanctions lists and ensuring their foreign trade transactions that is also likely to be extremely difficult due to globalization the rules of the game in the financial markets.

Separately, the Ministry of Finance should prepare a project “retaliatory” sanctions against Ukraine, including the possibility of “blocking assets and prohibiting withdrawal of capital” for a list of Ukrainian individuals — the members of the government, politicians and security forces. The economy Ministry has to present import analysis of the Russian Federation of Ukrainian goods and to evaluate which of them can be introduced “retaliatory measures of a restrictive nature.”

Apparently, the main anticyclonic in the government’s plan is its comprehensive structure, performing the role of a limiter escalation of the “war of sanctions”. With such a plan the White house will be much easier to respond to domestic radical anticyclonic initiatives — formally, all possible answers are included in the plan in a moderate form.