“Kommersant” familiar with yesterday’s written sworn affidavit of FBI agent Kevin Helsana American court in the case of the arrested July 15, citizens of the Russian Federation’s Butinai. According to the investigator, there is evidence to suggest that she try to flee the country, “using contacts with the Russian government,” so he asked them to leave her in custody until trial. According to investigators, at her apartment during the search was found a handwritten note in which Maria Butina asked, “what if Russian intelligence job”. The press Secretary of the Russian foreign Ministry Maria Zakharova said that the FBI is performing its core duties “is a political order”. 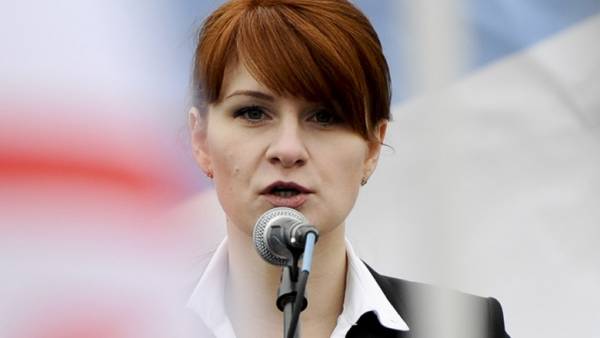 According to the testimony of Kevin Chelsea, she may try to escape, using his connections with Russian officials, so it is necessary to conclude a pre-trial detention. “As Butina was uncovered as an illegal agent of the Russian government, there is the inevitable risk that it will enter into an agreement with the government, which helped to escape from US,” writes Kevin Helson. According to him, there is reason to believe that Mary Butina was planning before his arrest to leave the United States. She paid for the apartment only until the end of July and at the time of arrest her bags were Packed.

We will remind, the Russian Maria Butina was arrested in the US late last week on suspicion of working as an unregistered agent of the Russian government. According to investigators, she used her status as the founder of the Russian organization “Right to arms” in order to make contact with the American rifle Association and other donors of the Republican party to influence its agenda in the best way for Russia. She also allegedly tried to arrange a meeting between Vladimir Putin and Donald trump came in to this son of the American President Jared Kushner. He, however, refused.

Kevin Hilson also said that a person who U.S. authorities believe the employee of the Russian special services (according to the description, is the Deputy Chairman of the Central Bank Alexander Torshin), in its negotiations with other Russians named Maria Butina “undercover” and was compared to Anna Chapman, the other accused of working for the Russian government, a Russian woman who was deported from the United States in 2010. “Your fans even the autographs do not take? — asked by investigators, Mary Butinai to a Russian official in March 2017.— You’ve outdone Anna Chapman, she’s with plastic guns pose, and you with these.”

Russian woman, according to investigators, had cohabited in the United States with 56-year-old unnamed American, who complained in social networks (access to personal correspondence was also received FBI). Presumably, this is Paul Erickson, a Republican political activist who is involved in the investigation of spectracolor Robert Mueller about Moscow’s intervention in the US presidential election in 2016. The American, as follows from the published agent Helsana correspondence Maria Butunoi (FBI got access to her computer and iPhone), encouraged her to meet with the largest possible number of people “off the record”. He said that it is necessary to explain the “ammo/sponsors”, that is much more useful for open air performances on radio, TV or in Newspapers. “You can meet with an unlimited number of representatives of American companies, if you introduce a channel of communication with the future the Russian government,” wrote American partner Maria Butunoi the letter in 2015.

Kevin Helson also describes in detail the correspondence of Mrs. Butinai with her Russian contact (presumably Alexander Torshin), where they discuss the visits to various events and actions for the “restoration of relations between two great peoples.”

She tried to organize a “lunch of friendship and dialogue” between the US and Russia and even intended to secure the presence of Russian President Vladimir Putin at the National prayer Breakfast, the annual gathering of American conservatives associated with the Republican party. In the opinion of the agent, that proves that Maria Butina “acted as an agent of the Russian government without registering”.

In October 2016 (a month before the US elections) Maria Butina wrote to his Russian partner, that Russia “has made its choice” (presumably in the presidential race) and “only time will tell”, the correct bets. In the future, in the published materials Maria Butina offers Russian counterpart arrangements for private conferences, inviting well-known speakers from both sides, to “the event received coverage in the press published positive information about Russia.”

The official representative of Russian foreign Ministry Maria Zakharova yesterday expressed the opinion that the FBI, rather than to engage his main responsibilities in the fight against crime, Frank performs a political order coming from the forces who “continue to escalate Russophobic hysteria”.

According to the programme Director, Russian Council for international Affairs Ivan Timofeev, the arrest of Maria Butunoi “serious damage to relations between Russia and the United States.” “The Americans are sending a signal that any Russian who has business with US, may be behind bars. His e-mail and social networks can become compromising. It is better to sit quietly, avoid meetings, conversations and generally not rock the boat — he said “Kommersant”.— This is a big step backward. He is surfacing our relationships, destroys their living soil, driving them to tin officialdom”.