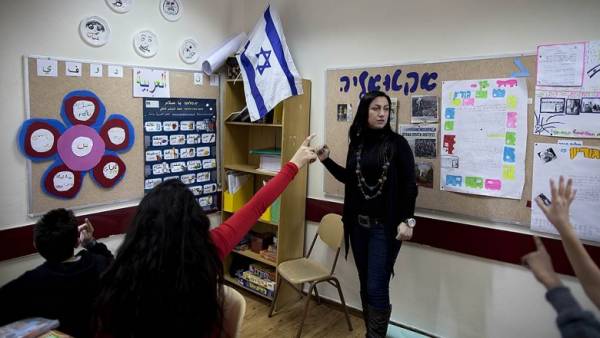 The Arabic language lost the status of a state language of Israel. The Knesset passed early Thursday morning, the Basic law, which enshrines the Jewish character of the State of Israel.

According to the law, the Jews are the only nation that has the right to national self-determination within Israel, a United Jerusalem is the capital of the country, and Hebrew is the only official language.

The law sparked protests of the Arab members of the Knesset and may lead to unrest among the population.

In the early morning adopted the law “On the Jewish character of the state” became 14-m the Basic law of Israel. The country has no Constitution. The legislation is based on the Declaration of independence of 1948 and the Fundamental laws adopted at different times. The new law voted 62 deputies out of 120, 55 voted against it.

Arabs constitute about 21% of the total population of Israel. So far, the Arab language was the equivalent to the Hebrew, now he will have a special status. The law establishes a Jewish state and a United Jerusalem as its capital. The law also describes how the symbols of the state of Israel coat of arms, anthem and flag are listed in holidays and days of remembrance, enshrined official status of the Jewish calendar, confirmed the right of all Jews to repatriation and the need to maintain ties with the Diaspora.

Another point, which causes irritation of the Arabs not only in Israel but also in Palestine for Jewish settlements in the occupied territories. Now the development of settlements will be considered a national asset that should be encouraged.

In Israel the Arab population formally has equal rights with the Jews, but constantly complains about discrimination, including in employment, in the allocation of subsidies for the development of national culture and its settlements, as well as in other social spheres.

The debate went almost all night. The initiator of the bill from party “Likud” AVI Dichter argued that the law will not harm the minorities living in Israel, and will not damage the Arabic language. But he was not believed. Together with the Arabs against the legislative initiative right camp voted for Zionist parties of the left and centrist.

During the work over the law, which was a few months, they were able to exclude the possibility of creating a purely Jewish settlements and the use of the principles of Jewish tradition as a source of law for the judicial system of the country. But to repeal the law failed.