The U.S. justice Department: Maria Butina was trying to get a job in exchange for sexual services

Russian Maria Butina, which was arrested in Washington on 15 July on charges of conspiracy to work as a foreign agent without registration, was in constant contact with Russian intelligence and tried to offer sex services in exchange for getting a job in a certain organization. On 18 July, reported National Public Radio, citing a statement by the U.S. justice Department. 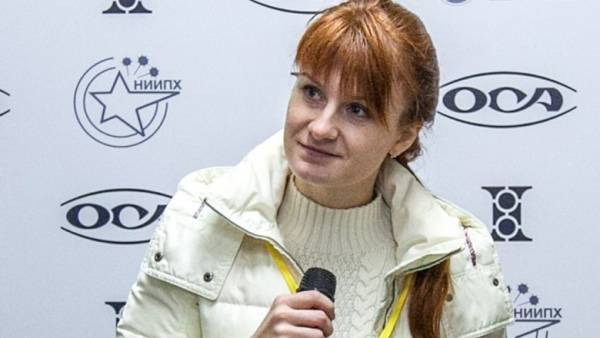 The Prosecutor’s office included this information in court proceedings, demanding to leave Butino in custody prior to trial because of the serious risk of her escape from the country. According to state charge, it says everything, including the “character (brought to Butenai) charges, the potential term, which she faces, the obvious evidence of her guilt, extensive contacts with foreign organizations and the lack of… significant relations with the United States.”

Even the Prosecutor said that Butynol has “access to money”. According to the prosecution, she was planning to transfer money outside the United States. Her contract for the rental of property is valid until the end of July, and Butina has already collected the personal belongings in the box, indicative of her plans to relocate, said the prosecutors. It is possible that the representative of the Russian authorities, with whom it has entered into an agreement, was going to help her leave the country, according to the materials of the charges.

According to court records, she was in constant contact with the Russian Federal security service (FSB) during the entire time she was in the US.

Even agents of the Federal Bureau of investigation (FBI), which followed Butynol, saw her together with the Russian diplomat, who, according to U.S. authorities, worked for the secret services.

According to U.S. authorities, Butinai also had close ties with a certain Russian oligarch. His name in the investigation is not disclosed.

The FBI also claims that Butina is not just used sex as a means to achieve their goals. Besides the fact that she entered into a relationship with the “Face 1” (according to sources NPR, it is about the political activist Paul Erickson), Butina “offered another male sexual services in exchange for a position in the organization, which represented her interest.”

The organization name in the court records is not disclosed. As reported by NPR, Butina tried to establish contacts with American politicians through the National rifle Association USA (NRA). However, the edition has no confidence that the speech in this case goes about getting a job in the NRA.

American intelligence agencies believe Torshin’s main “patron” Butinai in Russia. In March 2017, says the FBI, Torshin wrote Butinai that she was able “to beat Anna Chapman” (Russian intelligence agent who operated in the United States under the legendary entrepreneurs of Russian origin).

In January 2017 Butina sent Torshin your picture with a backdrop of the Capitol on inauguration day, Donald trump. According to sources NPR, Torshin wrote in response: “You are a desperate girl! What else to say!”.