From Sochi to Khabarovsk — the streets of Russian cities flood rains. 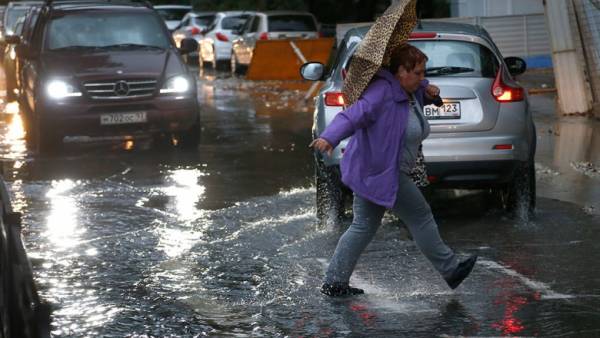 A state of emergency declared in Volgograd due to hit the city of showers. In addition to roads were waterlogged area is in the built world Cup stadium “arena Volgograd”. While there cope with the consequences of flooding, storm warning is declared in several regions of the country, both in the South and in the far East. Abundant rainfall is expected and in Transbaikalia, where the damage from the floods has already exceeded 1 billion rubles. Read more at portal iz.ru.

The flood in minutes

State of emergency declared in Volgograd due to heavy rains. Sunday, July 15, the city is flooded — dropped 70 mm of rain, which is almost two-month norm of precipitation, said the regional meteorological center. The effects of the weather eliminated the next day, however, the threat of another flood has not receded. In the city administration said that the sewer “worked to the limit of their capabilities”. If not for the storm drains, the consequences would have been much worse.

Public transport rose, and taxi drivers that are not captured elements, raised price tags. Have been flooded railway tracks near the station Sochi. Country clay roads washed away. Because of revelry of elements, in addition, closed several shopping centres, stores and warehouses were flooded, and goods broke, the extra visitors were escorted out of the building. In one of the districts had partially shut off the electricity.

Most attention was attracted by an incident near the stadium “Volgograd arena”: the water collapsed bulk slopes and blocked the roadway.

The consequences of the landslide had eliminated four of the truck and about 20 “KAMAZ”.

In administration of Volgograd subsequently explained, because of the loose soil on slopes. The design of the new stadium built for the world Cup, was not injured. “The stadium is a good base of concrete, its water I walked and walked the hill. Hit just slopes, which has not yet taken root in the soil and ascended grass” — said the press service of the city administration.

The rain washed away the embankment near the stadium “arena Volgograd”. Tons of sand floated on the Zero Longitudinal highway pic.twitter.com/B87FCPbnIj

What was the damage from the rains have not yet had time to count. Is to be done by the special Commission. On Sunday’s downpour, however, all might not be over. Volgograd weather center predicts that heavy rain will again descend upon the capital of the Volgograd region at night July 17, in the day — intermittent rain with thunderstorm. Precipitation will fall, presumably, on Wednesday.

From Sochi to Chelyabinsk

From showers suffered not only Volgograd, while in other cities the consequences were not so significant. Rain hit several regions from the South, extending to the Far East of Russia. Several streets flooded in Krasnodar, which point stood ground movement and traffic jam. As in Volgograd, was flooded several stores in the Mall.

In Anapa, the local administration has banned swimming at all beaches. While precipitation is moderate, but there is a risk not only storms, but tornadoes. After a Sunday storm sank several districts of Sochi. The first floors of many buildings remained in the water on Monday.

In the town of Shakhty, the Rostov region, where a strong thunderstorm was held on Saturday, July 15, from a lightning strike killed a pregnant woman. She and four others hid from the rain under a tree, and he was struck by lightning. Pregnant woman died, four people were injured, reported “Interfax” citing a source in the operational services. Information about the incident confirmed to the Investigation Committee. Regional emergency Department on July 17 announced a storm warning: on Tuesday, the wind speed can reach 20 to 24 m/s And rain, presumably, will go for three days.

According to weather forecasts, fear of the floods on 17 July is in Saratov region. Squally wind speed may reach 18-23 m/s, in the heat of 30 degrees and above are expected to be powerful showers and thunderstorms. In another region of the Volga Federal district — Orenburg region — are already feeling the disaster. On a street in Orsk on Sunday, several cars stalled, the drivers stood waist-deep in water. In addition, flooded the road stuck in a bus with passengers.

In the Urals, the rains have been a couple of days earlier. On a Friday night in Chelyabinsk dropped 25 mm of rain — a third of the monthly norm. According to local media, the streets got filled with water within 20 minutes after the start of the downpour. Emergency services eliminate the consequences until four in the morning. “Urban stormwater drainage calculated on the average level of precipitation, and on Friday fell a lot more here Chelyabinsk and swam”, — explained in the local administration.