Residents of a small village in the East of Greenland were forced to evacuate after the seaside arrived a huge iceberg. Local authorities fear that if the ice block will break, the resulting wave will flood the house. 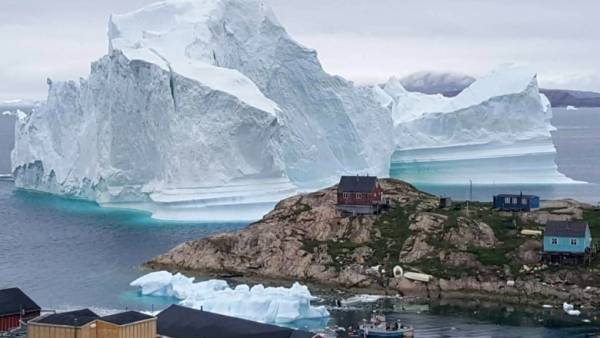 The iceberg literally loomed over the houses, located on a promontory in the village of Innaarsuit. However, apparently, it ran aground, and did not budge, according to local media.

Just live in the village of 169 people, and residents whose homes are closer to the iceberg at the time moved, according to the Danish Agency Ritzau.

“It has cracks and holes, we fear that it could fall apart at any moment”, — said a member of the village Council Suzanne A. Eliassen local newspaper Sermitsiaq.

It indicates that the power plant and fuel supply to villages close to shore.

Last summer, four people were killed after waves flooded the houses in the North-West of Greenland in the earthquake.

Some experts warn that the huge icebergs will appear more often due to climate change and destruction of the ice cover. And this, in turn, increases the risk of a tsunami.

In June, scientists at new York University managed to shoot a video which shows how a giant iceberg breaks off from glacier in East Greenland.