“I have told you how to do Brexit. Mae didn’t listen”

Tramp in London to discuss the meeting with Putin. 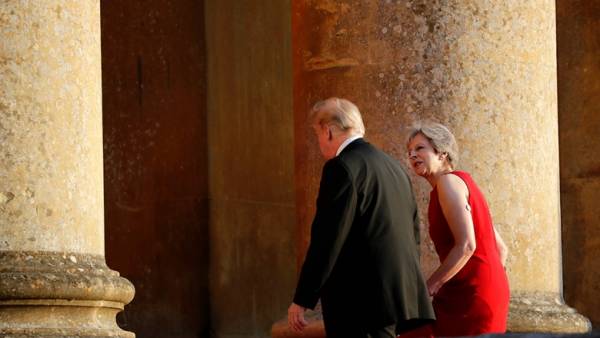 The President of the United States Donald trump arrived in London a two-day visit. July 13, he will meet with British Prime Minister Theresa may and visit of Queen Elizabeth II. Trump has already set an aggressive tone of these negotiations. In an interview with The Sun, he lashed out at the already accepted plan of a British exit from the EU that the politician thinks is too soft. In London, the trump will also discuss the upcoming meeting with Vladimir Putin in Helsinki.

Zakharova said the resignation of Johnson with the words of Lermontov

American President Donald trump with his wife Melania arrived in the UK yesterday, in the afternoon of July 12. That the atmosphere around this event is stressful, says at least the action plan of the trump. To Parliament the U.S. President will not be speaking, and that the violation of British traditions.

Earlier, the British Parliament spoke out against giving visit trump state in connection with his statements against Muslims.

In 2011, the British Parliament addressed during the state visit of US President Barack Obama, who, like many American presidents before him, underscored the unique relations between the two countries.

“Our relationship is special because of values and beliefs that unite our citizens for many years,” said Obama then. From trump such statements in London is not exactly welcome.The “yellow” President

The main theme of a British visit, trump will be a British exit from the EU — Brexit. The American President has never hidden that he is a supporter of Brexit, and reiterated it before a trip to London, at the NATO summit in Brussels.

Before the talks, the British media published an interview of trump.

Interesting choice of publication. The American leader spoke with reporters The Sun — one of the most popular “yellow press” of the country.

Trump statements were designed in the same “yellow” style and were intended to shock the London guide. American politician lashed out at already approved in the UK, the Brexit plan.

The title speaks for itself: “I was telling Mae how to make a Brexit. She failed. The deal with US is cancelled, says trump.”

“If they go for this option, Brexit, we will continue to do business with the EU instead of to do business directly with the UK. This is likely going to kill our deal, will be the end of British trade relations with the United States,” — said the American President The Sun.

Among other striking quotations in the prosecution of the EU authorities that they are destroying their culture, because they opened doors for migrants. The statement that a retired British foreign Minister, Boris Johnson (an active supporter of the idea of “hard” Brexit, which shares trump) “would be a great Prime Minister”.

In the publication the Sun was placed in a separate frame review trump about his impending meeting with the Russian President in Helsinki. Title: “Poisoning “the Rookie” does not cancel trump with Putin.”

According to the American leader, accusations of Russian special services in the use of poison in the framework of the “business Skripal” is not a reason to refuse to establish relations with Russia.

Mei wants to trump raised in a conversation with Putin, the question about “business Skripal”. However, she reacted positively to the meeting of American and Russian leaders.