PayPal: “Your death violates our agreement”

The electronic payment system PayPal sent who died of cancer a woman the message that her death violates the terms of the credit agreement with the company. 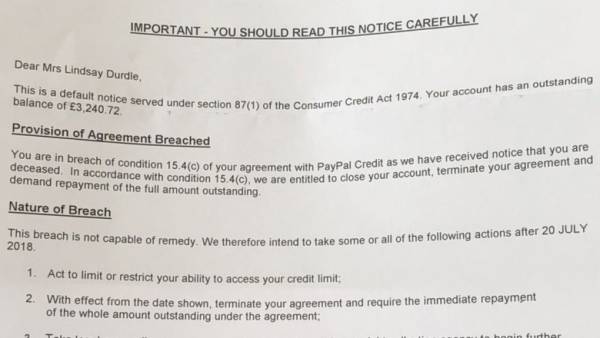 Death is not only the end of life, but also the beginning of a very specific legal problems. For example, the British it is illegal to die in Parliament — then you have to bury the deceased with honors. And even death can break the user agreement, as it happened with the one family resident in the UK.

Briton Lindsay Deral died in late may of this year from cancer.

A month later her widower received from the electronic payment service PayPal a letter informing him that his death, the deceased spouse has violated the terms of the agreement with the company and PayPal can give the case a legal move.

Amazed Howard of Degl sent bi-Bi-si a copy of the letter.

A year and a half ago, Lindsay was diagnosed with breast cancer, which quickly spread to lungs and brain. She died may 31, leaving, among other things, the debt of 3200 pounds PayPal Credit — unit PayPal, which provides consumer loans and credit cards.

In mid-June, a widower sent to the company copies of death certificates, wills and other necessary documents. After several weeks at his home address received a letter with the heading “Important. Read carefully” addressed to his dead wife.

The letter stated the exact amount of the debt and said: “You are violating paragraph 15.4© your agreement with PayPal Credit, because we received notice that you are dead… this violation is not subject to correction”.