Why in the Soviet Union, the prosthesis was replaced by disabled women. 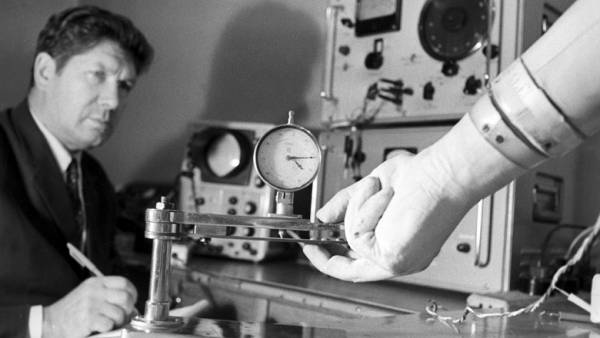 After the great Patriotic war left many veterans-cripples. How to return them into society and give them a normal life? In an article published in the journal Osiris, the historian Frances Bernstein talks about how the dentures were replaced with Soviet veterans family and allowed again to feel men however, only in Soviet propaganda.

In appearance, the implementation strategy and representation of the postwar Soviet prosthesis was undoubtedly masculine objects designed in order to worn by men. Moreover, the prosthesis itself proved to be a male problem — many so-called disabled persons-inventors, maimed in the war and made dentures. So they returned and other veterans of lost masculinity — because the cripple couldn’t be a complete man and at best could claim on the compassion of others, but in a life of a healthy person.

The state, focusing attention on these people with the help of propaganda, showing them as an example for others. However, the reality was otherwise.

The image of the crippled

That is a country can be judged by how it treats its citizens. Of all the Western powers of the twentieth century, the Soviet Union gave the lowest value of human life. Since its Foundation, it survived the Second world war, collectivization, accelerated industrialization, the base of the Gulag, mass deportations, resettlement and famine.

In his famous speech in 1931, Stalin said: “Hold the pace means to lag. A backward beaten. But we don’t want to be beaten. No I don’t!” And in 1941, the Soviet propaganda showed the Soviet Union the victim of Nazi violence. She encouraged citizens to avenge their devastated villages, ravished women and murdered children, sacrificing everything in the name of saving the Motherland.

If Stalin propaganda portrayed as the “father of the peoples”, the role of the mother is played here by the Motherland as a symbol of patience, vulnerability and devotion for which her children must be willing to lay down their heads.

Because the helplessness in the USSR were considered as female, disabled, returning from the war presented a problem for the state: how to show the manliness of the red army?

However, the images of wounded and maimed often found in Soviet propaganda, but most often in cartoons and posters depicting the enemy: the Nazis tore off his head, they tore it apart, showed the enemy legless disabled. All this did not go unnoticed, the image of the crippled veteran, returning home, almost not used, because it belonged exclusively to the enemy. Instead, the posters were displayed broken helmet or a mother waiting her son from the war.

The caution with which the Soviet Union treated the problem of the disabled, stemmed from the inherent in the Soviet ideology of hostility to charity (as hypocritical bourgeois practice) and begging (in which the scars and mutilations are a means for making money). All this was considered remnants of the past, as the concept of pity towards the cripple after the revolution, all required the disabled had to give the social security system. In addition, in pre-war time injuries was seen as a result of drunkenness and lack of discipline in the workplace, although people often get them due to unsafe working conditions, poor equipment, or unrealistic production goals.

After the great Patriotic war, the streets of Soviet cities were filled with veterans-cripples. They were going on a crowded railway stations, begging for alms. Soon, however, they had to leave this place. Someone did it voluntarily, but many were obliged to make the state as part of a package of resolutions on the fight against “anti-social parasitic elements”, published in the early 1950-ies. Some commentators also urged citizens to be vigilant — after all, under the mask of a disabled person may be hiding an enemy spy.

Relying on our own strength

It is clear that in such a situation there is a question of what to do with veterans with disabilities who returned from the war. His solution was dentures, which allowed “the return of masculinity” maimed person, it would seem, worthy only of pity. Thanks to them, the former soldiers could move and work without assistance, and thus again become “productive members of society.”

The importance that the authorities attach to finding a solution to this problem, well illustrated by the fact who was awarded the Stalin prize, the highest award in the country in that period. For example, it was awarded to Andrei Tupolev, Mstislav Rostropovich, Andrei Sakharov… In their ranks was disabled, the constructor-taught Viktor Kononov, created an artificial hand for your own use. Subsequently, “hand Kononov” has become a real salvation for many amputees: the five fingers of the prosthesis can bend and hold items, it was put on without assistance and provided to a disabled life of a practically healthy person.