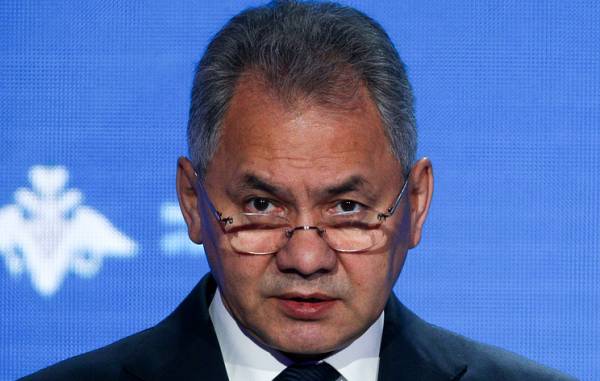 TASS, July 11. The American elite to escalate the tension in relations between Russia and the United States, said the head of the defense Ministry Sergei Shoigu in an interview with Il Giornale published on Wednesday.

As the Minister noted, the United States called the reason for the crisis in bilateral relations “aggressive” actions of the Russian Federation in the international arena.

“However, on our deep belief, the tension in our relationship the whole time artificially lengthened those American elites who are convinced that the world is divided into “us” and “wrong,” – said Shoigu.

He recalled that the United States unilaterally broke the key to global security agreement, in particular withdrew from the ABM Treaty and, contrary to the data at the time of the USSR promises, initiated the expansion of NATO to the East.

“I like the President of the Russian geographical society has long wanted to give his American colleagues on the globe, so they looked at it and told us why their stated “enemies of America” are in the middle and far East, and all their military bases, and group sitting so close to the borders of Russia. We, perhaps, have to defend,” – said the head of the defense Ministry.

“The strategy of neo-colonialism” of the US

Russia will always impede American neo-colonial strategy aimed at the weakening of legitimate governments in other countries, Shoigu noted.

“We are talking about the strategy of neo-colonialism, which the United States has tested in Iraq and Libya and which is to support any, even the most wild, ideologies to weaken legitimate governments,” he said.