In Greece found a clay fragment of “the Odyssey”

Archaeologists working at the ancient Olympia (Western Peloponnese), found during excavations a clay tile with 13 verses of “the Odyssey” by Homer. The label was created in the Roman era, according to preliminary estimates not later than the III century BC. 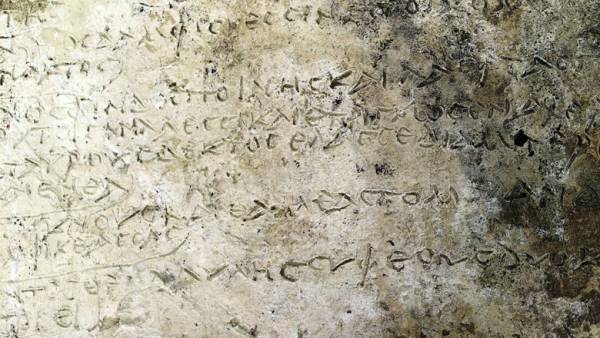 The Greek Ministry of culture, quoted by Reuters, said that it is the oldest fragment of the poem found on the territory of the Republic. According to representatives of the Ministry of culture of Greece, the inscription, despite its brevity, is of great archaeological and epigraphic value.

The tiles found near the temple of Olympian Zeus by archaeologists from a joint expedition of the Greek archaeological service, the German archaeological Institute and the universities of Darmstadt, tübingen and Frankfurt am main.

Found in Olympia passage of the Odyssey have been read: this episode of XIV song, one of the calls of Odysseus, king of Ithaca island, with swineherd Imeem. All the XIV Canto of the poem is dedicated to staying incognito of Odysseus in the house of his faithful servant, who tells about the events that occurred on the island over the 20 years that the hero spent on the Trojan war and the wanderings of the (will of the gods the journey of Odysseus home from Troy took ten years).

An epic poem about Odysseus ‘ return, one of the main characters of the war of the Greeks against the Trojans, was established approximately in the VIII—VII centuries BC. Consisting of more than 12 thousand lines of the “Odyssey” along with the other Homeric poem — “iliadou” — has become one of the most important literary achievements of antiquity. Already in the III century BC by Lucius Livius Andronicus translated the poem into Latin. Around the same time in Alexandria, work began on extensive philological commentary to the poem. Completed this project in the beginning of II century BC Aristarchus of Samothrace made up the authoritative edition of the Odyssey, which are based extant lists. Most of them date from the XI and XII centuries, but is known to an earlier but incomplete sholei — for example, the manuscript of the X century MS. For other uses. V. 1. 51 in the collection of the Bodleian library (Oxford). The first printed edition of “the Odyssey” in Greek appeared in 1488 in Florence.