The village is lifeless. And it’s not a horror movie

The island of Shikoku — the smallest of the four main Islands of Japan. It is here that the casual tourist might stumble on something I initially goosebumps. 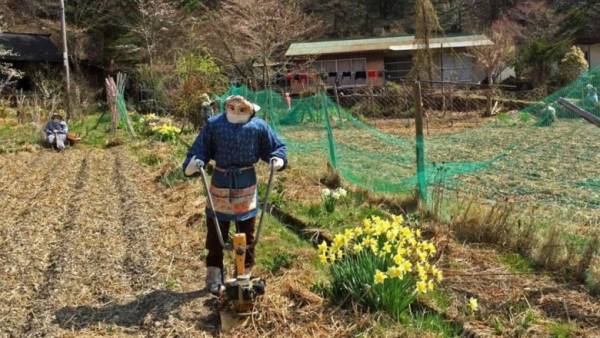 I decided to explore the countryside of Shikoku. This small island, and without that not too frequented by visitors, but I think I got in there, where no foot of a tourist.

Gripping the wheel of a rented car, I drove carefully along the narrow road, which sooner or later had to lead me through the valley to one of the bridges from the vine. There was not a soul.

I was passing through a deserted village, a dozen houses which are dangerously hanging over the river on metal stilts, crossed a sharp turn and saw not far off three figures.

People were sitting at the pole. They were rubber boots, rough farmer’s pants and jackets. On his hands white gloves. On their heads — caps.

All anything, but in their postures was something unnatural. Not until the end of the human.

When I pulled up quite close, I realized that it is not the people. Their chubby faces were made of white fabric instead of the eye — buttons, eyebrows stitched with black thread.

I drove a bit and soon saw another figure a man pushing a wheelbarrow. Another figure pulled the weeds in the field. Five more were sitting on a bench at the bus stop.

While I was trying to figure out where to hit and what kind of alternative reality around me, I saw on the side of the road a new shape. And this time she was strikingly similar to humans.

She was wearing a gray jumpsuit and black sneakers, his hands in gloves, head covers hat. I looked at the road and… Whoa! The figure took a step!

I slammed on the brakes. The figure took another step!

I pulled over, got out of the car and cautiously approached the figure in the hat, not knowing what to expect.

The figure slowly turned to me.

From under the hat looked at me a face of a living person, soft features, shining eyes. “Yes?” the woman replied in Japanese.

“Excuse me, can I ask you something?”.

I pointed to the figures on both sides of the road. “Do you know who did these amazing things?”.

A couple of seconds, she intently looked at me, and then grinned. “I did it!”.

That’s how I met Ayano Tsukimi, mistress scared Shikoku island. It was in 2013 when I traveled to green valley in the middle of nowhere North-Eastern part of the island, where a road paved only 50 years ago.

My wife grew up on the island of Shikoku, and her brother told me a lot about these places where life is difficult and lacks the urban amenities — thatched, a barley field, the bridges of vines…

But brother-in-law never mentioned a village inhabited by scarecrows.

Seeing the surprise in my eyes, Ayano-San laughed.

We passed two boys (or rather, dolls that look like boys) playing next to a rusty Bicycle, and a woman sitting in the shed with his back to the road.

Ayano-San took me to his modest home. On both sides of the entrance to it is located another figure: a girl in a school uniform, a mother with a child on her lap, an elderly gentleman in a business suit with a cigarette in hand.

I took off my shoes and stepped into the room, tatami-Mat, where I had an eye-buttons of a plurality of dolls in human growth — creations Ayano-San.

Among them was a couple in traditional wedding kimono, solemnly standing in the room. I felt like a character in the television series “the twilight zone”.

Ayano-San sat me down on the Mat next to the traditional irori fireplace and went to make tea. Then she returned with a small lacquered tray, on which stood two cups, and gently put one in front of me.

I bowed and thanked. She looked at me, and her eyes sparkled with laughter. “They look fancy, right?”

“That’s for sure. Please tell me about them.”

“Kakashi. Shapes that farmers put on the field or in the garden to scare away birds.”