Foreign migrants off from production

The new rules prohibit the registration of their place of employment. 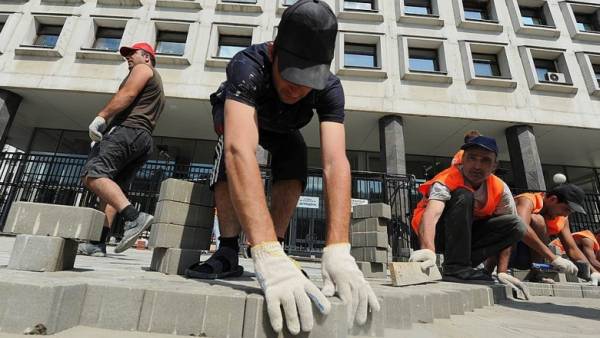 In Russia come into force amendments to the law prohibiting foreigners put on the migratory account in the place of work. Now migrants can be arranged in apartment, hotel, hospital and even in jail, but the office — only in case of actual residence. For default rules to foreigners threatened with expulsion from the country. Experts believe that the amendments will create problems for the companies, placing qualified professionals: employers face fines of up to 800 thousand rubles.

Amendments to the Federal law on migration registration of foreign citizens in the Russian Federation come into force on 8 July. The document clarifies the concept of “place of stay” arriving in Russia a foreigner, if earlier, in his capacity could act as a shelter and the organization, now migrants can be issued at the place of employment only if he actually lives there. In article 21 of the law also stipulates that a foreigner can be put on the migratory account in a hotel, sanatorium, children’s camp, medical organizations, and even correctional facility. Note that the migration registration, the foreigner must get up, usually within a week after arrival in the country (for Kazakhstan, Armenia and other EEU countries — 30 days).

In the English-language newspaper The Moscow Times reported that the amendments come into force caused a mild panic among expats. The head of the American chamber of Commerce Alexis Rodzianko admitted to the publication that does not know how to register himself in his own apartment, and at the Agency Visa Delight assured that you are getting calls from foreigners “without a break for this reason”. Note that the Ministry of internal Affairs together with the Ministry of foreign Affairs shall within three months after the amendments came into force to prepare a draft of necessary changes in government-approved Rules for the implementation of migration registration of foreigners. Now under article 18.8 of the administrative code violation by the foreigner of rules of stay in Russia threatens the penalty from 2 thousand to 7 thousand rubles, and expulsion from the country.

According to the statistics of the main Directorate of the interior Ministry on migration issues, in 2017, Russia moved 17 million foreigners permanently live in the country with 9.5 million citizens of other countries. The number of illegal migrants in October 2017, the Ministry of internal Affairs estimated 2.6 million migrants in 2017 delivered 15.7 million foreigners — mostly from Russia (4 million), Tajikistan (2.1 million), Ukraine (about 1.8 million) and China (about 1.5 million). In Moscow and the Moscow region the accounting was 4.5 million. According to the HSE, 33.6% of the migrants in 2017 were employed in wholesale and retail trade, repair of vehicles and household goods, 16.4 per cent — in construction, 13.9 per cent in social services and housing, 8% in households.

It is noteworthy that the amendment of the legislation was preceded by the proceedings before the constitutional court (CC) of the Russian Federation. Americans have Nafanail Joseph Warden and Parker Drake Oldham in 2016, was expelled from Russia for what stood on the account in the Mormon Church in Samara, and lived in an apartment at a different address. After a series of lost lawsuits preachers appealed to the constitutional court, which ordered the legislator to remove uncertainty and not allowed to re-register the foreigners put on record at the receiving party, if their legal relationship with the host is lost. In this case, the CC stated that “in all other cases… if the law does not provided other rules of migration registration of” foreigners, must register “at the place of stay in place of their actual residence” as enshrined coming into force of the amendments. Note that the “other rules of consideration” in the law at that time permitted the registration of labor migrants at the place of stay in non-residential premises of the employer, to which the COP stated in the reasoning of its decision. In the main Directorate of the interior Ministry on migration issues was unable to immediately say how many foreigners are now placed on the account at work.

The lawyer of the network “Migration and law” the human rights center “memorial” Olga Tseytlina recalls that registration of non-residential premises is not allowed for citizens of the Russian Federation, although employers often registered migrants in uninhabited basement or semi-basement premises of residential houses. Lawyer Pavel Astakhov believes that the amendments could “seriously complicate the life of “white companies””. “Used to be easy to treat foreign workers at the legal address of the company, but now they have to put on record at the address of actual residence. Hence, the company itself or must rent and arrange accommodation for the employee, or the owners of the rented apartments must put on record tenants that not everyone wants to do,” he says. “This will complicate the life of the employer and the employee,” — said researcher of the Institute of demography Vladimir Kozlov, who says that the addresses of foreign students were recorded and some universities.

Mr. Astakhov added that providing false information on the registration of foreigners threatens companies with fines of up to 800 thousand rubles.

The representative of the national legal service “Emulex” Elena Proskurov recalls that in connection with the holding of the world Cup, the timing of migration registration have been reduced to three days. The expert does not exclude that the police are “aiming to check how the host country and the migrants themselves”.

According to Mrs. Tseytlina, most migrants still does not live where registered, and the effectiveness of the amendments will depend on the control system — it is very likely that stricter liability will only increase corruption. “Perhaps there will be more rubber apartments,” says Mr Kozlov. Elena Proskurov from “Amulets” recalls that the procedure of the migration registration can be completed at the post office, and “the presence of the foreigner does not need”.

Recall, for the fictitious setting of migrants on record in a residential area a criminal offense, and in the state Duma expect the second reading of a similar amendment in respect of “rubber offices.” The explanatory note gives an example that the address of the office of “Personnel centre “East”” 34 square metres placed on the account by 3.3 thousand workers, and at the office of the Interregional trade Union “Protection” — 56 thousand.