Disgruntled residents of the city burned more than 50 cars, set fire to the Lyceum Leonardo da Vinci, the service station and gas station. 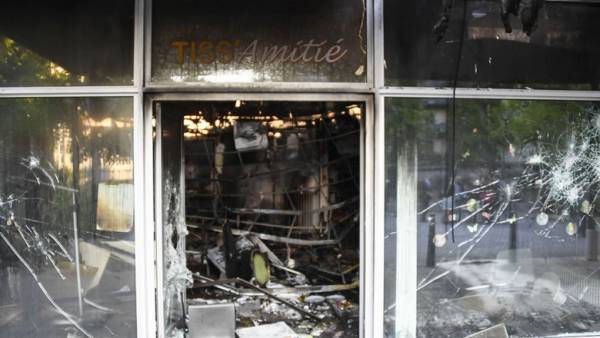 PARIS, July 6. /TASS/. The unrest has resumed in the night of Friday in Nantes, where on 3 July, a police officer fatally shot 22-year-old local resident at the time of verification of documents. This was reported by the Agency France Presse.

Damage to the city

The police arrested last night three people, including a 14-year-old, in which were found a tank with gasoline and a wick.

According to the fire services in different parts of the city were burned about 50 cars. In addition, unknown persons set fire to the Lyceum Leonardo da Vinci in the North-East of Nantes, as well as station maintenance of fishing vehicles and filling stations. In addition, on Thursday evening, a group of aggressive people thrown into a patrol van parked inside the police station in the suburbs of Nantes, a bottle with an incendiary mix.

In the evening more than a thousand residents gathered for a rally to protest against the police action. The protesters called for a thorough investigation of the incident and punish the culprits.

Earlier, the Prosecutor of Nantes Pierre Sennes said that the policeman who shot the young man in custody. This is a temporary measure in which the period of restriction of liberty may not exceed a few hours. Investigators are questioning the suspect, the results of which may be considered to be formally charged.

The incident in Nantes