KIEV, July 5. /TASS/. The leader of the party “Batkivshchyna” Yulia Tymoshenko is suspected the head of state Petro Poroshenko intention to cancel the upcoming March 2019 presidential election under the pretext of aggravation of the situation in the Donbass. 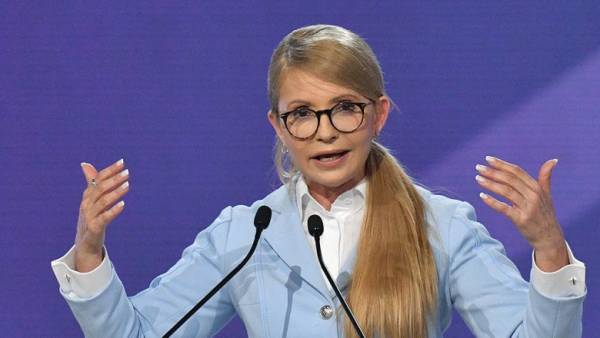 In the program “Good morning country”, which was released on Thursday, the First Ukrainian TV channel, she said that the President’s plan is to inflate the conflict in the East of the country with the subsequent imposition of martial law.

“This is an extremely dangerous plan that while Petro Poroshenko thinks to implement in Ukraine. He wants, in principle, to the election of the President. Now began a deep negotiation process with those who like to head “LNR-DNR”, that is, in fact, a people who occupied part of Ukraine. Poroshenko wants to initiate the beginning of the war,” said Tymoshenko.

According to her, the President wants “was captured further territory of Ukraine”. “He wants them all burned, she continued. — He wants to impose martial law and hold elections in principle.”

“I want to warn Poroshenko: if, God forbid, he will go in this way, in fact, is the beginning of a new military escalation in order to keep his power and not hold elections, this will know the whole world knows the Ukrainian people, and we will not let you do that, Peter. All Ukrainians should know that there are such plans”, — summed up Tymoshenko.