As it became known””, Russian President Vladimir Putin awarded closed by decree of the first Deputy head of the presidential administration Sergei Kiriyenko and Deputy Prime Minister for the military-industrial complex Yuri Borisov the title of hero of Russia. Interlocutors “” say that the higher ranks in Russia are awarded for achievements in the defense sector, about which the President spoke in the message to the Federal Assembly on 1 March. High awards were given to several employees of the state Corporation “Rosatom”. 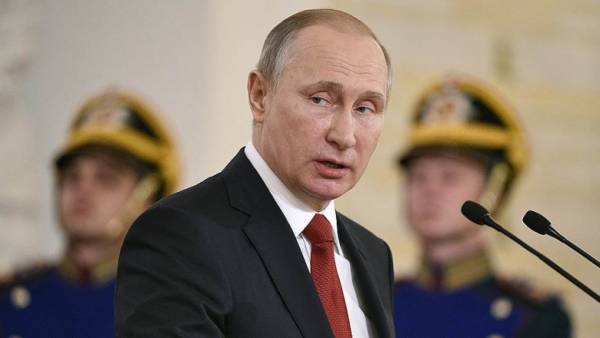 The curator of the political block of the Kremlin Sergey Kiriyenko received the title of Hero of Russia, told “Kommersant” sources in the government. It was assigned to, closed by presidential decree. According to the title of Hero of the Russian Federation, it is assigned “for merits before the state and people associated with the Commission of a heroic feat.” The title assigned by the President. The hero of the Russian Federation also awarded medal “gold Star” and a certificate conferring the title. The Russian hero in his homeland under a separate presidential decree establishes a bronze bust with an appropriate inscription.

Kommersant’s sources say that the assignment to Mr. Kirienko, the highest rank affected its role in the development of the nuclear industry (headed Rosatom since 2005 and 2016), and in addition, the President appreciated the contribution of Mr. Kiriyenko in his campaign. On March 18 Vladimir Putin for the first time in the history of Russian elections has received voices more than half of voters: 56,4 million votes from 108,9 million with a turnout of 67.9%. He’s at 6.8 million exceeded its own record 2004 — then he went for a second term. Interlocutors “” say that, together with the curator of the political unit received the award and several employees of “Rosatom”.

One of the sources of Kommersant familiar with the situation confirms that in the nuclear industry in recent months was “number of awards” employees working in defence.

What projects is the reason, the source “b” is not explained, but noted that before the President’s address to the Federal Assembly on 1 March, in which Vladimir Putin spoke about the new weapons, the military division of the state Corporation, including first Deputy Director General Ivan Kamenskikh, was on long business trips.

According to “Kommersant”, “Rosatom” engaged to test a missile with a nuclear power plant 9М730 “Petrel” (the development of Yekaterinburg OKB “Innovator”): in particular, specialists of the Russian Federal nuclear center — all-Russian research Institute of experimental physics (ZATO Sarov, Nizhny Novgorod region) took readings at start-up of rockets of this type with the Central nuclear testing ground of the Russian Federation (the island of Novaya Zemlya). Another interlocutor of Kommersant said that shortly after his address to the Federal Assembly Vladimir Putin met with some scientists who could participate in cutting-edge military developments. The President was accompanied by Sergei Kiriyenko. Officially, this was not reported.

Kommersant’s sources believe that work on a number of the same “presidential projects” associated with the creation of weapons based on new physical principles, the distinctive mark of the Hero of Russia “Gold Star” received Deputy Prime Minister for defence industry Yuriy Borisov.

Until may 2018, he in the status of Deputy defense Minister oversaw the purchase and development of weapons. “He has done a lot of work, including joint projects with Rosatom”, — said one of the senior officials. According to him, the number of internal decrees were signed in late may.

In the “Rosatom”, the White house and the Kremlin declined to comment.