Us Senator John Neely Kennedy on the visit to Moscow. 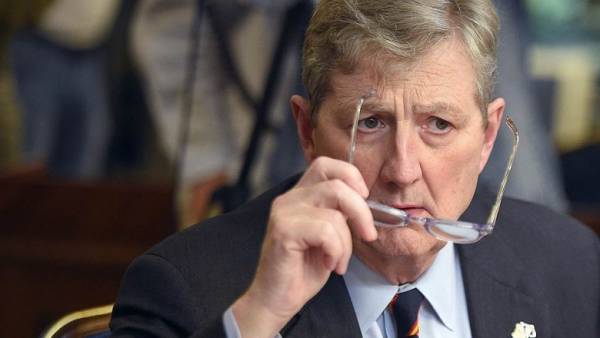 In Russia for the first time in many years was visited by the delegation of the members of the Senate and house of representatives of the United States. One of its members — the Senator from Alabama John Neely Kennedy told the correspondent of “Kommersant” Elena Chernenko about what the Americans were trying to convey to his interlocutors, and heard in response.

— Are you satisfied with the results of the trip?

— Russia is a beautiful country, the people here are very friendly. They want for themselves and their children a better life as Americans. I was glad to learn more about your country. Russians are very proud of their country, and rightly so.

Their meetings went well, but follow any of them any results — it is still too early to judge. I explained to our Russian interlocutors that in America, using the word “please”, a man expresses respect. It is a sign of friendly relations. And then I, addressing him, said, “Please do not interfere in our elections. But at the same time, and in the French, German and British. Please get out of the Ukraine and let the Ukrainians decide their future for themselves. Please walk away from the Crimea. Please help us to achieve a peaceful settlement in Syria. Please don’t let Iran gain a foothold in southern Syria, otherwise it will lead to the escalation of the war.”

— And you said Russians?

— They deny that they interfered in the U.S. presidential election. But we know that the intervention has been.

— Evidence that was not presented.

— My Russian interlocutors said. What I was pointing to advanced in the USA charges against 13 citizens of the Russian Federation (involved in the work of the Agency for Internet studies, St. Petersburg.— “Kommersant”). If Russia went to meet us and gave these people to US so that they could be brought before an American court, the Russian authorities would see that the evidence of guilt these people have.

We told our interlocutors: if Russia continues to interfere in the internal Affairs of the United States and make it to the November Congressional elections, our reaction is immediate and very stiff.

But, according to the authorities of the Russian Federation, and in 2016, no intervention was.

Are you upset about the fact that Russian President Vladimir Putin did not accept your delegation? I understand that you requested a meeting with him.

— Personally, I initially did not believe that we will be accepted. If he (Vladimir Putin.— “B”) would like to meet, you would find the time. And he would have made directly, as well as I did with his foreign Minister.

And I was very straightforward with the Minister of foreign Affairs. As, however, and he (Sergei Lavrov.— “B”) with us.

— After your visit to the state Duma and the Federation Council of Russian lawmakers expressed a desire to continue dialogue and willingness to visit Washington. You are waiting for them

— This will depend on further actions of the Russian side. It is too early to talk about it. Too early. First, we need to see change Russia’s behavior.

— Russia must stop meddling in our Affairs and elections. It would be a good start.

— So you are waiting for the delegation of the Russian Federation not earlier than November?

— We need to see changes in the behavior of Russia, then we will make a decision.

Russian authorities say the sanctions have not hurt Russia, but it is not.

And I really hope we don’t have to enter against Russia quite so draconian measures. But if we see the intervention in November, no other way to be.

— I can’t say. Our reaction will depend on Russia’s actions. We would like to establish relations with Russia. I personally would like. But, in order relations have improved, the Russian government needs to change their behavior. It’s very simple. If the Russian authorities will not go for it, it will not improve. It would be a pity and clearly would benefit Russian citizens. This is my personal opinion.

— You are counting on concessions from the Russian Federation, but in a recent interview said themselves that “to try to convince Vladimir Putin is how to feed the shark with his hands”?

But it can also feed the shark with his hands. It just has to be done very carefully.

— You also said that “Russia should be hit with sanctions, to break the Russian so much that they are unable to collect bones.”

— If Russia continues to interfere in our Affairs. For us democracy means a lot, and we will not tolerate that someone tried to influence our elections.

— The Russian authorities say that the United States intervene everywhere.

— Your delegation visited Russia on the eve of the summit between the two presidents, what are your expectations from this meeting?

— I don’t expect much. But I’ll be pleasantly surprised if they manage to reach breakthrough agreements. However, the mere fact of their meeting is a positive first step. I know that many of my colleagues on Capitol hill, the Democrats first of all, the summit is a mistake. I don’t think so. As I do not consider an error the fact that the President trump met with (North Korean leader.— “B”) Kim Jong-UN. I need to know where to start.

— No, absolutely not. They are not similar.