MOSCOW, 5 Jul — RIA Novosti, Andrei Kots. The longest flight of a strategic missile, the fastest main battle tank, the hardest thing in the world cannon, the deep dive the divers of the Navy — Ministry of defence launched on the departmental website section “Book of records of the Armed forces of the Russian Federation” dedicated to the outstanding achievements of our military — both personal and as a team. RIA Novosti publishes a selection of the most interesting of them. 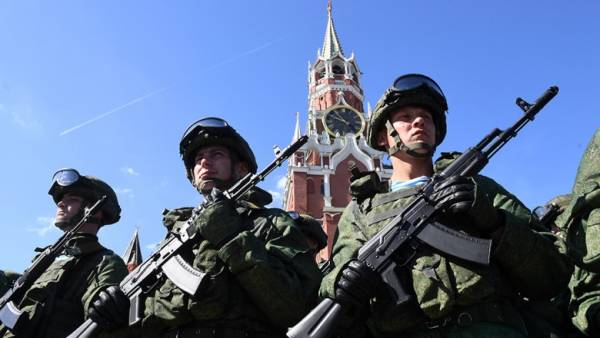 One of the main Champions of the Navy is considered the hero of the Russian Federation Colonel Igor Matkovsky, today occupying the post of Deputy commander of the 45th army, air force and air defense aviation. Over the years he made over 200 landings on the deck of a heavy aviabearing cruiser “Admiral Kuznetsov” aircraft su-25UTG, su-27 and su-33. It’s decent, even by the standards of the aircraft carrier of the US Navy, where pilots perform 150-180 on average landings during the service.

In Russia, where pilots of deck aircraft is currently less than astronauts, the record of Colonel Matcovschi truly remarkable achievement. And unsafe for the body. At the time of the hook of the cable of the arresting gear and landing hook fighter pilot uncongested four to five units. It hurts the spine. But the higher the price of the record Igor Matkovsky.

There are records and by Navy divers. The thirtieth of October 2017 force search and rescue support to Pacific fleet for the first time held a training session at a depth of 317 meters. Seven specialists-glubokovodnogo vessel “Igor Belousov” the pilot made a descent in a diving bell with access on the ground. This is not world record, but the Russian military glubokovodnye “took” 317 meters for the first time. Before this record was considered a 200 meter depth. Immersion was preceded by a week-long training, during which the group passed the procedure of compression in the chamber.

In the section devoted to the Navy, many of the records of the Soviet times. So, on 6 August 1991, the nuclear submarine K-407 “Novomoskovsk” for the first time in the history of the boats of this class volley shot on the ground full ammunition — two military ballistic missile R-29RM and 14 is equivalent to the ballistics models. Neither before nor after this one decided not to — too much risk to the ship.

“Novomoskovsk” gave a farewell salute Dating back to the history of the mighty Soviet power. However, the heirs of the Soviet Navy is also capable to show the “gruel”. The twenty-second of may 2018 the first submarine “Yury Dolgoruky” made a successful salvo of four ICBM “Bulava” total equivalent to 160 bombs dropped on Hiroshima. The Russian divers-strategists clearly showed that they, too, are bad jokes.

The most honorable record for military aviators of Russia has established a reserve Colonel Igor Radobolsky for the years of service he was awarded eight battle awards: order “For military merit”, three orders of Courage, two orders of red Star, order “For service to Motherland in the USSR Armed forces” third degree, and finally, the Gold star of Hero of Russia. In Afghanistan and Chechnya, the brave pilot was a guardian angel for ground forces. His Mi-8 helicopter has saved from an environment of fighters dying infantry, were taken under heavy fire wounded were taken to remote checkpoints ammunition, medical supplies and reinforcements.

Here is just one example of his personal heroism. The eleventh of January of 2002, he led a group of six helicopters on a large base of Chechen fighters in the area of Sharo-Argun.

Mi-8 Rodaballo took the lead, provoking the enemy. Fighters began to shoot at the car from all the guns lit up its own system of fire, after which their position was covered by rockets link shock Mi-24. “Turntables” dropped tactical landing, and he immediately joined the battle. One of the groups came under fire from the surviving machine-gun militants, six soldiers were wounded.

Radobolsky decreased and “leaned against” the helicopter to a steep slope on two wheels. During the loading of the wounded, the car has received 24 hits, was damaged dashboard, broken down piece of equipment, Rodaballo was wounded in the hand, but continuously maneuvering, he brought the helicopter out of the fire. A direct hit from a grenade launcher was destroyed by one of the rotor blades, but the pilot kept control and returned to base.

Russian pilots perform feats not only in time of war. In April 1996, the crew 566 th military transport regiment on a heavy aircraft An-124 “Ruslan” has made a unique landing on unprepared ice runway airfield polar Tenkeli in conditions of very low temperatures. The situation was complicated by the fact that the air base was not equipped with radio means, which could help the crew to accurately log on the right course.

In the history of world aircraft heavy military transport planes have never been planted, in fact, on bare ice.

The slightest error in the actions of the pilots could lead to disaster. And the crew of the Russian “Ruslan” three weeks in April 1996 completed six such landings.

Serious record set by ensign Maria Litovchenko, the assistant communication center of the communication staff of the TSBS 106 brigade connection. In 2015-2017 it was the best of the Armed forces, radio telegraphist at the competition “brilliant reception” in the combined team of the army. Maria hearing takes 23/22 group of Morse code (letters/numbers) per minute and capable of transmitting the sensor for 60 seconds 250 characters “Morse code”. For excellence in service was awarded the title of “Honorary radioman of the Russian Federation”.

There are records and in military formations and military units to logistics. From 22 to 23 September 2017 master bridge unit 69-th separate brigade logistics Western military district in the shortest possible time, built a temporary crossing of the Euphrates river in the area of the settlement Area the Syrian Arab Republic. The length of the bridge — 201.9 million meters, it was built from the designs of the small dismountable road bridge. While the staff length MARM collected from the same set, is 118 meters. Such long bridges in the zone of active hostilities to restore the Russian military had ever.

In the section on Ground forces, a lot of attention paid to the records of military equipment. So, self-propelled 240-mm mortar “Tulip” is recognized as the most heavy weapon in the arsenals of modern armies. It is alleged that mortars of this caliber in the armed forces of other States never happened. And the famous jet system of volley fire “Tornado” — the most powerful gun in the world. A full volley of his 300-millimetric jet shells covers an area of more than 67 hectares — almost 100 soccer fields. And the accuracy of Cyclone two to three times higher than foreign MLRS, including the American MLRS.